Book Reviews: ‘Things are Going to Get Worse and Why We Should be Glad’, & ‘Invisible – Britain’s Migrant Sex Workers’

Things are Going to Get Worse and Why We Should be Glad.  By Michael Roscoe. New Internationalist. £9.99. 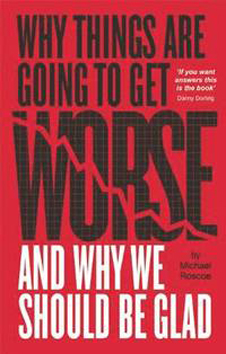 The basic assumption of this book is one we can share: ‘Real wealth creation requires real work, and real work must involve the transformation of nature’s raw materials into something of value to us humans. There is no other way to create wealth.’ This is, of course, the basis of all labour theories of value including Marx’s, even though wealth and value are not the same.

Roscoe argues that, as wealth can only be material, the service sector does not create any, but just consumes it, even if the service is useful and/or contributes indirectly to future material wealth production. Education, healthcare and various personal services do contribute to this by maintaining and improving the workforce that produces the actual wealth. Finance, on the other hand, says Roscoe, does not. It can play a useful role in channelling funds to the productive sector but most of its activities since the 1980s have just been shuffling money between speculators which doesn’t help wealth production at all.

The growth of the service sector reflects  the rise in productivity in the productive sector (agriculture, fishing, mining, manufacture and construction) over the years. The extra wealth produced has gone to maintain and expand the service sector, absorbing the workers displaced from the productive sector by rising productivity.  Why, according to Roscoe, ‘things are going to get worse’ is that this can no longer continue because the service sector is being automated  too (and oil is going to run out and the financial bubble is going to burst). As a result unemployment is going to grow until the system collapses. As ‘it is only in times of crises that real change can be brought about’, this is ‘why we should be glad’.  In other words, worse is better.

This may (or may not) be true, but Roscoe’s ‘real change’ turns out not to be one. He wants to retain capitalism but modify it by government action, a return to the ‘mixed economy’ of before Thatcher which he oxymoronically calls ‘market socialism.’ Actually, it’s not quite a return to those days as one of the things he wants governments to do is to slow down growth (as it’s using up the Earth’s resources) by slowing down the rise in productivity. Given capitalism, that’s like King Canute ordering the tide not to come in. It won’t work and can’t work because capitalism is a system of capital accumulation driven by competition between profit-seeking enterprises,  both private and state, which imposes rising productivity and growth on them as the price of staying in business.

A disappointing book, then, which starts off making a good point but which ends up advocating an impossible reform of capitalism. 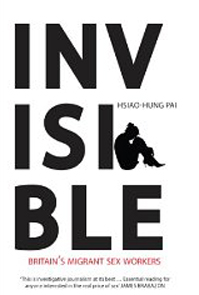 In Chinese Whispers (reviewed in the August 2010 Socialist Standard) Pai examined the living and working conditions of undocumented Chinese migrant workers in Britain. Now she looks specifically at migrant sex workers, herself courageously working underground as a ‘housekeeper’ in several brothels.

About a quarter of the eighty thousand sex workers in Britain are immigrants, mostly from China or eastern and south-eastern Europe. There has been much economic disruption in these areas; women workers have been particularly badly hit by the closure of state-owned businesses in China, for instance. One solution, which is especially appealing for those with young children to bring up and educate, is to emigrate and then send remittances home. One Polish woman who Pai spoke to could earn as much in a day in a brothel in London as she could earn in a month in Katowice.

Not that most come intending to work in the sex industry. It’s just that badly-paid and insecure work in agriculture, food-processing factories or restaurants is not enough to support a family back home or to pay off the debts of those who were smuggled here illegally. As one madam tells Pai, ‘No one would do this job if they weren’t desperate.’ They may be able to earn £300 a night, after paying part of their takings to the brothel-owner. One woman was returning to China, having earned £20,000 in four months.

But you would indeed need to be desperate to work up to fourteen hours a day, having sex with a dozen or more men, six or seven days a week. There is an ever-present fear of violence from customers or of being robbed. Whether prostitute, housekeeper or madam, there is no prospect of negotiating working hours or conditions. Illegal immigrants have great difficulty in accessing health care, including sexual health, and their poor English and social isolation often handicap them in this regard.

Further, many women are trafficked into Britain specifically for sex work. This seems to be particularly common among Romanian women and Pai mentions one woman smuggled here and then sold from one pimp to another for £2000.

The government’s crackdown on undocumented migrants has led to sex workers from outside the European Union being driven further underground in order to avoid immigration controls and make themselves, in the book’s title, invisible to the authorities.