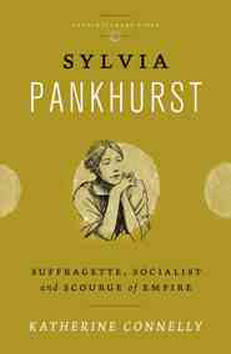 Author Katherine Connelly admires Sylvia Pankhurst for her radical but reformist political struggles, her opposition to the First World War and support for the Bolshevik revolution.

Sylvia Pankhurst was brought up in the political world of the SDF, Socialist League and ILP and raised on the radical poetry of Shelley, and A Dream of John Ball by William Morris. Sylvia was much more than a Suffragette, she wanted to link the struggle for women’s suffrage to universal suffrage and to industrial struggles by the organised working class. Whereas Sylvia was a ‘socialist’ in the ILP mould and had a love affair with the married Keir Hardie, Emmeline and Christabel Pankhurst were bourgeois feminists who wanted the vote on the same property qualification as men.

She worked in London’s East End, establishing the East London Federation of the Suffragettes which later became the Workers’ Socialist Federation. She organised and spoke at the solidarity meeting with workers from the Dublin Lockout at the Albert Hall in 1913 at which James Connolly spoke of the common struggle ‘against the domination of nation over nation, class over class, and sex over sex’.

After the First World War there was leftist internecine wrangling over the creation of the Communist Party of Great Britain, in which she took part, becoming a subject of Lenin’s criticism in his book ‘Left Wing’ Communism: An Infantile Disorder. She opposed reformism in November 1920 when she wrote ‘Although I have been a Socialist all my life, I have tried to palliate this capitalist system… but all my experience showed that it was useless trying to palliate an impossible system’. She had no time for the Poplar Labour councillors who went to prison for a rates strike. Author Katherine Connelly writes that she ‘dismissed the councillor’s efforts’ and was expelled from the newly formed CPGB in 1921.

Connelly, as a Leninist, sees Sylvia Pankhurst as a ‘left wing communist’ and says she ‘was not and never claimed to be a socialist theorist’, a way of dismissing anything she wrote about Leninism, the state capitalism in the Soviet Union or socialism. Pankhurst wrote ‘The words Socialism and Communism have the same meaning. They indicate a condition of society in which the wealth of the community: the land and the means of production, distribution and transport are held in common, production being for use and not for profit.’ She drew attention in January 1922 to ‘Russia’s new economic policy of reversion to capitalism’ and in May 1924 remarked that ‘the Russian workers remain wage slaves’ and of ‘the NEP and the advocates of State capitalisation’.

We can appreciate what she wrote about the future society in July 1923 ‘Since production will be for use, not profit, the people will be freely supplied on application. There will be no buying and selling, no money, no barter or exchange of commodities’, and in August 1923: ‘Full and complete Socialism entails the total abolition of money, buying and selling, and the wages system.’

For Communism – An Introduction to the Politics of the Internationalist Communist Tendency. ICT. £3

The ICT sounds just like one of the myriad Trotskyist sects which mix and match a dozen or so radical-sounding words (‘workers’, ‘international’, ‘communist’, etc) to create a formulaic name.  In fact, they are not, but are instead one of the main groupings of the left communist political tradition. This was the political tendency criticized by Lenin in his ‘Left-Wing Communism: An Infantile Disorder’ in 1920, mainly for their alleged sectarianism. The UK section of the ICT is the Communist Workers’ Organisation (CWO) who have debated with us on a number of occasions this last 30 years or so.

This pamphlet is well-structured and there is much for socialists to agree with, such as this:

‘Socialism or communism (for Marx these concepts were synonyms) is not a condition or programme which can be put into practice by a party or state decree, but a social movement for the conscious overcoming of the capital relation, the doing away of the state, commodity production and the law of value . . .  Communism will destroy the capitalist state and end national borders. It will overcome money, wage labour and commodity production. Communism means doing away with the power of control of a special class. For this reason, communism is synonymous with the liberation of the working class from all forms of exploitation. This liberation can only be the work of the working class itself’ (p.11).

The CWO also agree that the so-called socialist countries were really a form of state capitalism, that attempts to reform capitalism won’t work and that left-wing parties offer no way forward. They also take the same view as us on wars, the futility of ‘national liberation’ struggles and terrorism.

So far, so good. But the CWO (like other left communists) also believe that trade unions are an intrinsic part of the repressive apparatus of capitalism and that socialists cannot use conventional ‘bourgeois’ democracy as part of the revolutionary process, but must create ‘workers’ councils’ instead. More seriously still, the CWO – like other left communist groups – have a broadly Leninist conception of revolution which turns the revolutionary process upside down.

Heavily influenced by a particular interpretation of sections of Marx’s German Ideology, where he wrote that the ruling ideas in any epoch are the ideas of the ruling class, the CWO take the view that a majority socialist revolution is impossible because the mass of the working class in capitalism is always going to be inculcated with ruling class ideas about the system. This leads them to the equally Leninist view that a revolution with only a minority of socialists is all that is possible and that only after this will the working class be able to shake off capitalist ideas.

One of the many problems with this view is that this effectively constitutes having the pregnancy after the birth. Another is that the CWO have made it more explicit here than they normally do that after the minority revolution they will be aiming to set up a workers’ state, which for us is a contradiction in terms. Its role will be to run capitalism while attempting to spread socialist consciousness and move society in some sort of vaguely socialistic direction:

‘A so-called ‘workers’ state’ or the ‘dictatorship of the proletariat’ is, in the first instance, a political category. Nevertheless, a ‘workers’ state’ will take measures for the improvement of the conditions of life of the working class (reduction in the working-day, free access to the health and education system, etc) and try to direct production for the needs of society . . . [but] as long as capitalist commodity production in the rest of the world continues to exist, the diktat of the law of value holds’ (p.38).

Sadly, these were exactly the kind of ideas that lead to the state capitalist dictatorships in Russia, China and elsewhere and the CWO seem to have learnt nothing from these events that goes beyond a romanticist fascination with them. A so-called workers’ state running state capitalism (nationalisation of industry, attempts to plan the market, etc) is no more likely to lead to increased socialist consciousness among the working class now than it was in the aftermath of the Russian Revolution in 1917, when it ended up setting the cause of socialism back by decades.

It is a great shame that the CWO and others like them have yet to assimilate this fundamental lesson from the history of capitalism.  A shame because some of their ideas are sound enough, but are rendered impotent because of their left communist failure to break completely with Lenin, even if Lenin conversely had no trouble breaking with left communism.

Is This an Alternative?

To mark the International Year of Co-operatives in 2012, the organisation Ethical Consumer held an essay competition on the topic ‘Is there a co-operative alternative to capitalism?’. Most of the chapters in this collection were entries in that contest.

Co-ops are described by Ed Mayo as ‘member-owned businesses with some distinctive characteristics in terms of form and ethos’. The general theme of contributions is that co-operatives do indeed represent an alternative to capitalism, though there are some dissenting voices, as we’ll see. Co-ops apparently employ 100 million people worldwide, and account for 21 percent of GDP in Finland, for instance. There are various suggestions here for expanding their role, such as creating a parallel currency or establishing peer-to-peer lending.

It is also pointed out that much open-source activity is co-operative-based. Nic Wistreich imagines a pitch on Dragons’ Den for a system where millions of people would contribute their ideas, opinions and videos free: it would surely have been laughed out of court, but in fact Twitter works pretty well. Wikipedia is another example of a massive co-operative venture.

An initial reaction to the view that co-ops really represent an alternative to capitalism might be that they involve wage labour and the production of commodities, just as any capitalist business does, so they can hardly constitute an alternative. They also necessarily involve profit-making but not, some would claim, profit maximisation. One point often made is to do with pay: Cheryl Lans notes that in the Mondragon co-op in Spain the highest-paid employee earns just 6.5 times what the lowest-paid gets. But this is still a sizeable disparity, and not all co-ops are so ‘egalitarian’ as, according to Chris Tomlinson, the CEO of the Co-operative Group in the UK was paid over £2m in 2010.

Tomlinson’s is the most critical of the chapters here, and he argues that being a co-operative is not a shield against recessions. The recent travails of the Co-operative Bank certainly demonstrate this, as the Co-op Group has lost control of it to hedge funds and other bond-holders. He also refers to American Crystal Sugar, an agricultural co-operative that locked out 1300 workers in 2011 for the best part of two years (see www.startribune.com/local/209279061.html). ACS gave over $2m in political contributions in 2012, to both Democrat and Republican candidates.

With a fair amount of imagination, it is possible to imagine a world of co-operatives, where pay differentials are far smaller than today and there is some semblance of democratic control by workers (and maybe also consumers). But it would still be a world of wages, prices and profits. Why not strive for socialism instead?