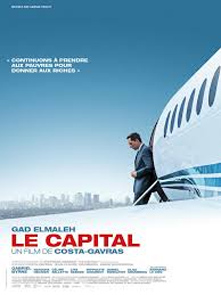 Le Capital is a European financial thriller made in France by Greek director Costa-Gavras that had its première at the Toronto Film Festival in 2012, was nominated for the 2012 Special Jury Prize at the San Sebastian International Film Festival but to date has not been released in Britain. Costa-Gavras is notable for his Academy Award winning film Z (1969), Missing (1982) which won the Palme d’Or at Cannes and Music Box (1989) winner of the Golden Bear at Berlin.

Costa-Gavras based his film on the 2004 novel Le Capital by French banker Stephane Osmont but was also inspired by the book Totalitarian Capitalism by Jean Peyrelvade. The film stars Moroccan actor Gad Elmaleh and also Gabriel Byrne, the Irish actor memorable in the 1995 noir film The Usual Suspects.

Le Capital is a fast-paced film set in the closed world of investment banking full of cunning boardroom politics, billion-dollar banking takeovers, supermodels, corporate suits in jets globe-trotting from Paris to London, New York, Tokyo and Miami. The main protagonist played with a reptilian self-awareness by Elmaleh occasionally breaks the fourth wall and gives ‘Brechtian’ asides to the audience. Elmaleh has the best lines such as ‘money makes people respect you, money is the master, money never sleeps’.

The film is dominated by memories of the global financial capitalist meltdown of 2008 caused by overproduction in the housing sub-prime market, deregulation of commercial bank securities such as the repeal of the Glass-Steagall Act, and the use of collateralized debt obligations (CDOs) and other derivatives described as ‘financial weapons of mass destruction’ by Warren Buffett. The crisis was such that Ben Bernanke, head of the US Federal Reserve, feared the end of capitalism and said of the $700 billion emergency bailout of banks: ‘if we don’t do this, we may not have an economy on Monday’. According to Roger C Altman in The Great Crash 2008 losses totalled $8.3 trillion.

Costa-Gavras makes reference to the ‘cowboy capitalism’ of a ‘brutal hedge fund’ who are ‘preachers of instant profit’. Elmaleh delivers lines such as ‘I am a modern Robin Hood who takes from the poor to give to the rich’. There is also a possible allusion to Dominique Strauss-Kahn, head of the IMF who in May 2011was subject to allegations of sexual assault. The working class represented by one character accuses the bankers: ‘You are bleeding the world thrice, the markets want blood, you fuck people with lay-offs, you fuck them with loans and debt, money rots everything’. A female English banker with a ‘conscience’ delivers an indictment near the end of the film: ‘Banks in the claws of predatory stockholders, the dictatorship of the markets, speculation, the rating agencies that run the economy for politicos that threaten society, democratic states that can no longer govern or get rid of banks who stifle them’.

Costa-Gavras concludes in Le Capital that the bankers ‘have fun and will go on having fun until everything is blown up in pieces’.