Book Reviews: ‘Bitter Experience Has Taught Me’, ‘Spanish Anti-Fascist ‘Prisoners of War’ in Lancashire, 1944-1946’, & ‘Siding with the Oppressor’

Lezard is a Guardian book reviewer and critic, with a column in the New Statesman called ‘Down And Out in London’. This book has been adapted from that column and is a self-deprecating and amusing account of his life after being kicked out of the family home by Mrs Lezard for a wide variety of inadequacies and misdemeanours. In near financial ruin, he shares a dilapidated house near Baker Street called ‘The Hovel’ with his friend Razors and the focus of this book is his struggle to maintain his head above water while also maintaining his daily wine habit (Lezard is an erstwhile companion of Jeffrey Bernard).

Originally from a relatively privileged background, Lezard is a left-wing, professional cynic who also thinks nothing of inviting police attention by playing midnight cricket – after a few glasses and with real cricket balls – on the chi-chi streets of Marylebone. The contradictions are often what make the humour here, and Lezard is an engaging writer.

He claims to have often annoyed his right–wing father (who at an earlier time of life had been rather bizarrely awarded the Order of Lenin, Fifth Class) with his forthright, radical politics. Interestingly, on one occasion this involved young Nick ‘urging everyone to vote for the Socialist Party of Great Britain’ during a mock election at school, with himself as the candidate. Inexplicably, he seems to have done worse than we normally do, and we can only hope that this psychological trauma didn’t influence his subsequent life path too much.

This short pamphlet, although primarily of local interest, is of considerable value in highlighting wider issues. After having escaped Franco’s victorious armies in 1939, most Spanish Republican fighters were interned in ‘democratic’ France, often in appalling conditions. After May 1940, those lucky enough not to be shot on site were ‘volunteered’ as slave labourers by the Nazis.

1944 was far from the liberation many had expected: Condemned as collaborators, many of the ‘Spanish Reds’ were again rounded up and imprisoned, this time by the Allies. By various convoluted routes, some 226 of these ‘POWs’ ended up in Hall o’ the Hill Camp near Chorley. The disrespect shown to the credentials of these honourable individuals is a clear indication that the Second World War was by no means a clear anti-fascist struggle.

Particularly interesting are the pictures, which were mostly taken by Marie Louise Berneri, the famous anarchist, and the all-too-brief personal stories of the individuals involved. The message is somewhat undermined by the copious references, a result of the text being taken verbatim from an academic journal. The publishers would be well-advised to adapt any future texts, bearing in mind that literature intended for the general reader does not have to be as rigorously sourced as scholarly works. 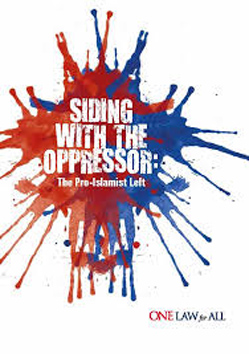 This is a well-documented pamphlet describing the hobnobbing of the Labourite politicians George Galloway and Ken Livingstone and of the SWP (via its front organisation ‘Unite Against Fascism’, Stop the War Coalition and, till 2007, Respect) with Islamic fundamentalists connected to the Muslim Brotherhood. It is a shameful story.

Galloway and Livingstone were in search of votes while the SWP was pursuing the tactic of a ‘people’s front’ against Western intervention in Afghanistan, Iraq, and (via Israel) Palestine, and now Syria. This last must be causing problems today as previous praise for the Assad and Iranian regimes will no longer be welcomed by the Sunni Muslim fundamentalists they courted, now that Hezbollah are fighting the Sunni jihadists.

Galloway, Livingstone and the SWP bear a heavy responsibility for having encouraged immigrant ‘communalist politics’ in Britain, so also encouraging the opposing ‘White communalists’ of the BNP and EDL. In doing so, they have dragged the name of socialism through the mud and, as the pamphlet points out, betrayed not only secularist principles (One Law for All campaigns against the application of Sharia and Jewish religious law in Britain) but also those Muslims and ex-Muslims resisting the reactionary views of the likes of the Muslim Brotherhood and the Iranian Ayatollahs. From a socialist point of view, it’s a negation of class politics and a confirmation of their anti-working class stance and activity.