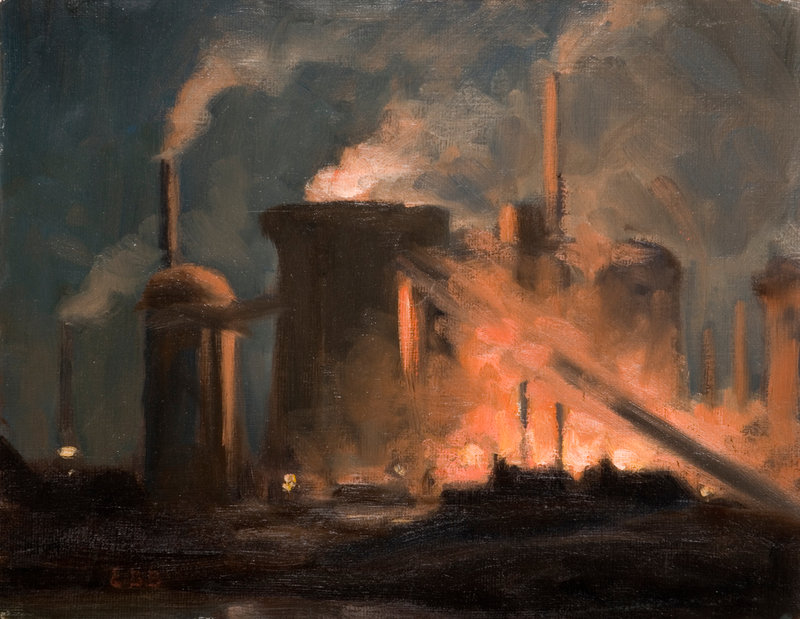 Wolverhampton Art Gallery recently showed the industrial landscapes of Edwin Butler Bayliss (1874-1950), ‘poet painter of the Black Country’ (Birmingham Gazette 1918) who was prolific in the early twentieth century. Bayliss was the son of industrial capitalist Samuel Bayliss who owned iron foundries in the Black Country which Bayliss painted along with the blast furnaces, steel works and coal mines owned by Tory MP and baronet Sir Alfred Hickman.

Tipping the Slag portrays a grey industrial landscape with smouldering slag heaps and smoking chimneys. Slag was the impurities from smelting iron drained from the molten iron during the smelting process and is painted in vivid orange against the grey wasteland. Blast Furnaces, Night is a black and grey industrial landscape with blast furnaces and chimneys and flecks of orange flame against the black and grey sky.

The Black Country is defined by geology; a 30 foot coal seam plus seams of coal, iron, limestone and clay which supported the development of coal mines, coking plants, iron foundries, and steel mills in the towns of Sandwell, Dudley, Walsall and Wolverhampton. In the Victorian period   it was the beating heart of   industrial capitalism, the industries of iron-making, steel production and coalmining forming the bedrock for the ‘workshop of the world’ showcased at the Great Exhibition of 1851. In 1866 Queen Victoria visited Wolverhampton and knighted the Mayor Sir John Morris.

Charles Dickens wrote in 1841 that the industries ‘poured out their plague of smoke, obscured the light, and made foul the melancholy air’ while the US consul visiting in 1862 wrote that the area was ‘black by day and red by night’. By 1860 within five miles of Dudley there were 441 pits, 181 blast furnaces, 118 iron works, 79 rolling mills and 1,500 puddling furnaces. Blast Furnaces, Bilston, Hickman’s from the Canal and In the Gin Pit (coal mined near to the surface) portray the ‘beauty in the Black Country’.

In the Black Country depicts a black and grey industrial landscape of blast furnaces and chimneys against a smoky sky with a worker struggling across the landscape. Evening in the Black Country shows three workers trudging up a dirt track between areas of dirty green vegetation towards industrial buildings and smoking chimneys.

The Condition of the Working Class in England in 1844 by Friedrich Engels details ‘an industrial revolution, a revolution which at the same time changed the whole of civil society’. This industrial capitalism meant the working class endured ‘filth, ruin and uninhabitableness’ in ‘the frightful condition of this Hell upon Earth’.

‘The Low Road’ by Bruce Norris

The Low Road by American playwright Bruce Norris was recently produced by Dominic Cooke at the Royal Court Theatre in London. The play seems inspired by 18th century picaresque novels such as Candide by Voltaire, Tom Jones by Henry Fielding or more probably Thackeray’s work The Luck of Barry Lyndon.

The Low Road is the low road of profitability rather than the high road of principle, and the amoral anti-hero Jim Trumpet played with viciousness and without any charm by Johnny Flynn follows the former course in pre-revolutionary America. Jim expounds the economic individualism of Scottish political economist Adam Smith. Smith is himself the narrator and part character in the play and is played with relish and Brechtian flourishes by Bill Paterson.

Jim quotes Adam Smith from his seminal work of bourgeois political economy The Wealth of Nations: ‘every individual endeavours as much as he can to employ his capital in the support of domestic industry. He neither intends to promote the public interest, nor knows how much he is promoting it. He intends only his own gain, and he is in this, led by an invisible hand to promote an end that was never part of his intention. Nor is it always the worse for the society that it was no part of it’. To which Norris adds ‘and once his prosperity is thus achieved, the rest of the damnable world can stick it up their fucking arsehole’. Marx identified that to Adam Smith ‘the means of production are to him from the outset ‘capital’, labour is from the outset wage-labour’.

Jim is forced to avail himself of the ‘christian communism’ of the New Light of Zion Colony where he engages in arguments with the congregants; ‘for if one’s coins sit idle there can be no growth, and without growth there can never be profit’ to which Constance replies that ‘all profit is theft’ and ‘to take from each, according to his ability’ is the mantra of the colony. Constance sees Jim’s financial dealings as ‘usury, money-lending and Jesus drove the moneylenders from the Temple’ but Jim believes ’tis speculation, finance and Jesus was an asshole’.

Constancesays of capitalist society; ‘there never was justice in this world. There was only ever violence and gold’. The Low Road is witty, perceptive, indeed it is a rip-roaring blast and a very clever take on the nature of capitalism. Constance’s parting words to the capitalist ideology of Adam Smith personified by Jim Trumpet are ‘Damned be your soul and damned your fucking lies’.