Promised Land by Gus Van Sant, director of Elephant and Milk, is a morality tale about corporate capitalist Machiavellianism written by Matt Damon, Academy Award winner for Good Will Hunting (directed by Van Sant) and John Krasinski. With Matt Damon’s effortless naturalism and the wonderful Frances McDormand, Academy Award winner for Fargo, as sales people for a global energy company, Van Sant directs a Capraesque film about the contemporary issue of natural gas extraction through hydraulic fracturing or ‘fracking.’ Promised Land is an earnest version of the Bill Forsyth comedy Local Hero. 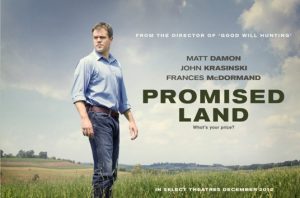 Promised Land was filmed in Pennsylvania where ‘fracking’ is widespread. The 2010 Academy nominated documentary Gasland directed by Josh Fox publicised the methane contamination of thirteen water wells due to ‘fracking’ in 2009 in Dimock, Pa where one well exploded. Cabot Oil & Gas were required to financially compensate residents. The US Environmental Protection Agency is currently investigating five cases of groundwater contamination. Another 2010 documentary Burning Water looked at ‘fracking’ in Alberta, Canada, the film’s title a reference to the fact that water from faucetscan be lit on fire. The capitalist lobby have countered with their own ‘pro-fracking’ documentary FrackNation released in January 2013.

‘Fracking’ is the pumping of a pressurised mix of millions of gallons of water, millions of pounds of sand and thousands of gallons of chemicals including toxins and carcinogens into deep wells to break up layers of shale rock to release the natural gas inside. But poorly lined wells, contaminated flow-back water coming back up and causing earth tremors or seeping into the water table, and the storage of flow-back water in unlined or leaky storage pits are serious concerns. Terry Engelder, a ‘fracking’ expert at Penn State University: ‘This is not a risk-free industry.’ Robert B Jackson at Duke University believes the likeliest cause of contamination is faulty cementing and casing of wells but also that ‘fracking’ may create cracks upward in rocks that could link up with pre-existing fissures, allowing gas to travel far upward.

The ‘fracking’ of natural gas is seen as a solution to the global energy crisis in the post-Fukushima era where oil is peaking, tar sand oil extraction is polluting, gas reserves are limited and although coal is still plentiful it is a ‘bête noire,’ and not enough development is taking place in ‘clean coal’ technology. Shale gas extraction is seen as a solution to rising energy prices, the way out of the economic recession and bringing prosperity to struggling rural communities as portrayed in Promised Land. In February 2013 PricewaterhouseCoopers said that shale gas reserves could push down oil prices by 40 per cent and boost the world economy by $2.7 trillion.

In April 2013 the WWF-UK said ‘It’s simply impossible to keep global warming below 20C and burn all known fossil fuel reserves – let alone exploit unconventional reserves like shale gas.’ Socialists argue that ‘fracking is a mining technology, and if it can be made safe, and if we need it, we may use it in socialism.’