Mixed Media: ‘Life of Galileo’ & ‘Death: A Self Portrait’

Life of Galileo by Bertolt Brecht 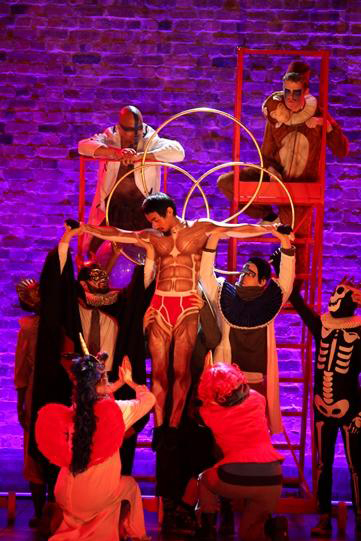 The RSC recently staged Bertolt Brecht’s 1947 play Life of Galileo at the Swan Theatre in Stratford upon Avon with Ian McDiarmid in the title role. Galileo substantiated Copernican theories of the heliocentric nature of the universe (‘the light of science shone as Galileo set out to prove that the sun is fixed and the earth is on the move’), which was counter to the Roman Catholic Church teaching of Aristotelian geocentric ‘crystal spheres’.

Galileo is part of the seventeenth-century scientific revolution when science emerged (‘the old age has passed, this is a new age’) to meet the material needs of the rising capitalist class. In physics there are the fixed laws of Newton, and in the philosophy of Cartesian Dualism the body is a machine, and Descartes ‘sees with the eyes of the manufacturing period.’ In Scene 11 Vanni, the Iron Foundry owner says to Galileo ‘we manufacturers are on your side’, and in Scene 1 the university curator states ‘how greatly is the science of physics indebted to the call for better looms.’ Scientist JD Bernal describes the period as one in which ‘religion, superstition and fear are replaced by reason and knowledge.’

Galileo is a sensualist for knowledge but also a financial opportunist who is ignorant of ‘Realpolitik’ in the Florentine world of Machiavellian ideals. Brecht believes Galileo is a ‘social criminal’. After his recantation before the Inquisition, Galileo becomes a servant of authority rather than asserting the right of science to transform the world for the benefit of the whole of humanity. For Brecht, science stood at the barricades with Galileo, but scientists betrayed their calling by neglecting their wider social and political responsibilities. Life of Galileo is really about the atomic bomb, the concept of science for the people and the responsibility of science to society. Brecht was dismissive of Einstein who suggested that atomic technology be withheld from the Soviet Union and of Oppenheimer when he had a change of heart after the H-bomb. Brecht’s Galileo can be usefully compared to the 1962 play The Physicists by Durrenmatt.

The scientific nature of Marxism was very important for Brecht. He valued doubt, criticism and free enquiry and believed the most important line in Galileo was ‘my task is not to prove that I have been right up till now, but to find out whether I have been right.’

In Scene 10 the people sing ‘All you who live on earth in wretchedness, Arise! Only obedience holds us back from earthly bliss. Who wouldn’t rather be his own liege lord and master?’

Death: A Self Portrait 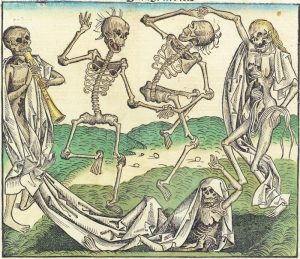 Death: A Self Portrait at the Wellcome Collection in London was an exhibition of art related to mortality taken from the collection of Chicago antique dealer Richard Harris. The key to Christian art about death is ‘memento mori’ (remember you must die). Pascal’s words ‘It is easier to endure death without thinking about it than to endure the thought of death without dying’ is fundamental to humanity’s thinking about ‘this mortal coil.’

Christian art of ‘memento mori’ in the Late Middle Ages was portrayed in the Dance of Death, which reflected the fragility of life in the midst of famines, the Black Death, the Hundred Years War, and the Peasant War in Germany. The ‘danse macabre’ depicting revelry uniting humans and skeletons is portrayed in Toten Tanz by Wolgemut in the 1493 Nuremberg Liber Chronicarum. Inspired by the Book of Revelation, the 1498 woodcut The Four Horsemen of the Apocalypse by Albrecht Durer depicts the staples of medieval life; plague, war, famine, and death.

The Miseries of War of 1633 by Callot are eighteen etchings of the Thirty Years War portraying soldiers pillaging, burning and killing their way through towns and cities. Engels described this war as ‘devastation’. It killed eleven million people, and ‘annihilated the most important parts of the productive forces in agriculture.’ The Disasters of War by Goya are eighty-two prints from 1810-20 which portray abuse, torture, killing, starvation, and other atrocities of the French invasion of Spain in the Napoleonic Wars.

The iconic images of the Mexican Day of the Dead originate with the painting of Calavera de Huerta by Posada which satirised bourgeois General Huerta in the Mexican Revolution. Posada’s Calavera de La Catrina is a satire on the 1875-1910 bourgeois dictatorship of Diaz which was an ‘industrial capitalism on top of the hacienda system, debt-peonage in the shell of a corrupt feudalism.’

The George Grosz 1958 collage Faces of Death references his own 1920 painting Republican Automatons. Both works are an attack on the mediocrity and mendacity of bourgeois capitalist civilisation which kills the individual human spirit.

According to bourgeois psychoanalyst Sigmund Freud in his 1930 work Civilisation and Its Discontents, the drive to death (Thanatos) now ruled supreme over Eros (Love). He wrote that ‘people need a Reality Principle to keep the Pleasure Principle under control otherwise we’d have anarchy.’ Wilhelm Reich replied that ‘the Reality Principle of the capitalist era imposes upon the proletarian a maximum limitation of his needs…the ruling class has a Reality Principle which serves the perpetuation of its power.’