Book Reviews: ‘The Little Book of Ideas’ & ‘What Went Wrong With Economics’ 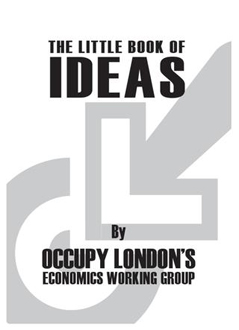 This 60-page booklet has been produced to mark the first anniversary of the Occupy camp outside St Paul’s. It is not a manifesto nor a policy document but ‘a small handbook which explains complex economic terms and theories in simple language’ so that people can understand what’s gone on and take part in discussions about what to do. The terms are dealt with alphabetically from ‘Austerity Measures’ to ‘Tax Havens’. When it comes to proposed reforms, the case for and the case against are presented though it is generally clear which side they are on. For instance:

‘Supporters of the banking system say that it has been the means by which industrial development has been so successful. However others contend that reckless lending by the banks is an inevitable consequence of a financial system driven by profit at all costs, and an alternative banking and monetary system is essential to wrest power and wealth away from the banking interests which precipitated the current crisis.’

What ‘others say’ here could be seen as the underlying theme of the whole booklet, i.e., that the current economic downturn was caused by the behaviour of the banks and so offers a purely monetary explanation.

It is true that in a system ‘driven by profit at all costs’, when things are going well and it seems that this will continue, ‘reckless’ behaviour in pursuit of profits will be an inevitable consequence. But this applies to the economic system as a whole and not just to its financial sector. In such a situation banks overlend. Corporations involved in the real economy overproduce. In fact, it is this latter that causes the financial crisis and subsequent general economic downturn.

Surprisingly, in view of the efforts made by currency cranks to influence Occupy, the booklet does not reflect the views of any of these. In fact it gives a not too inaccurate description of how banks work (‘acting as financial intermediaries between sellers and buyers, asset holders and lenders, in order to guarantee payment’) and even of so-called fractional reserve banking (‘banks are forced to keep a fraction of their deposits in case depositors want their money back’).

Their argument –not so different from the conventional view –is that ‘in recent years the system has got out of control’. Which suggests that downturns like the present could be avoided if in future banks are subjected to adequate regulation. The booklet, not being a policy document, only mentions various proposed reforms: separating retail and investment banking, ‘full-reserve banking’, peer-to-peer lending, banning short selling and trading on margins.

But what if (as Marxists contend) the banks did not cause the crisis, but at most only made it worse when it broke? Then, any ‘alternative banking and monetary system’ would be irrelevant as a means of avoiding future slumps. A more radical change away from the whole economic system based on production for profit would be required.

What Went Wrong With Economics by Michael Reiss. Goldhurst Press. 2011 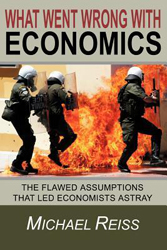 This is an interesting and provocative book that sets out to challenge a number of the received assumptions of conventional modern economics. The book is subtitled ‘The Flawed Assumptions That Led Economists Astray’ and this captures the essence of Reiss’s line of argument. There is an underlying supposition that if only economists really understood the market economy and its operation they would more effectively be able to recommend workable reforms to it.

Reiss makes some well argued points on occasion about the dynamic of markets, using a number of simplified, illustrative models (some taken from game theory or risk analysis) to explain his key points. Thus he shows that the dynamic of financial asset prices in capitalism is different to that for the prices of most other goods and services (e.g. when asset prices rise that often makes them more rather than less attractive to potential buyers – like those buying houses, or shares – on the basis that what goes up must continue to go up). He also discusses issues such as how statistical measurements within capitalism don’t always take into account such apparent market distortions – inflation measurements, for example, typically don’t include asset prices for houses, bonds, shares and so on, despite their prominence in the economy.

Reiss argues for a financial transaction tax on secondary sharedealing to stop stock market bubbles, and land reform and banking reform to address housing bubbles. He also argues against private pensions on the grounds that these also encourage asset price bubbles and crashes, and that the banks should not ‘create money’ for non-productive purposes like the granting of mortgages, share and derivatives dealing, and so on.

There are a number of problems with these so-called solutions to modern economic problems, however. One is that the proverbial genie is already out of the bottle and won’t go back in. If any government tried to implement these reforms they would only serve to prompt a massive outflow of capital to parts of the world economy that did not impose such restrictions. Such a capital outflow would cripple any economy and no government in the modern world would seriously contemplate it.

Also, Reiss is missing a trick, because he has focused almost entirely on what might be termed the financial and credit-based superstructure of capitalism as a system rather than its fundamentals. Indeed, it is illustrative that Marx and Marxian economics are not mentioned at all. This is a serious omission because Marxian economics explains why the surface phenomena within capitalism that Reiss rails against are the reflection of the deeper, underlying ‘laws of motion’ of the market economy.

To take one example, the problem within capitalism regarding housing and mortgages is not that large numbers of people are debt-slaves to banks and that this situation needs reforming (there are plenty of countries in the world where renting – part of Reiss’s favoured solution – is more common than buying houses using mortgages, and people there are no better off because of it). The real problem is that capitalism everywhere is based on an antagonistic system of income distribution where the vast majority of the population cannot directly access housing on the basis of need. Access to this housing is dependant instead on their ability to use their restricted salaries, wages or benefits to pay for it. But those who own the land and the houses (as well as the factories and offices, etc more generally) naturally wish to pay their workers as little as possible, so there is a clash of interests. It is this intrinsically class-divided aspect of capitalism, combined with the anarchic, unplanned nature of the market economy’s expansion that is a consequence of its competitive nature, which is the real issue. It is this that causes permanent social problems like poor housing and also periodic economic crises. Credit and asset price bubbles are an aggravating feature of this, but not its fundamental cause (for instance, there would have been no sub-prime mortgage crisis without an impoverished section of the working class in need of these sub-prime mortgages . . . ).

For Marx, the financial apparatus of capitalism and the periodic expansion and contraction of its credit system wasn’t the problem of itself, but essentially a reflection of it. Indeed, at root, it is focusing almost exclusively on this surface phenomenon rather than the deeper, underlying structural factors within capitalism that has led Reiss astray in this otherwise readable book.