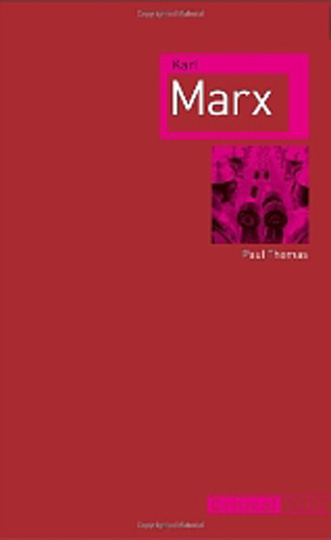 This is a concise, though not always easy to read, exploration of Marx’s life and writing. It can be usefully compared and contrasted with Francis Wheen’s best-seller Karl Marx (1999), which is more accessible but less reliable. Biographies of Marx these days have to declare where they stand on Marx’s alleged illegitimate son. The sole source for this allegation is a typewritten letter supposedly written by the estranged wife of Karl Kautsky. It is claimed that it was written in 1898 but was only made public, in mysterious circumstances, in 1962. Wheen is in no doubt that the allegation is true because, he says, the circumstantial evidence supports it. Thomas on the other hand, after weighing up the evidence, concludes that the allegation sits somewhere between ‘strains credibility’ and ‘stinks to high heaven’.

In Thomas’s book there is picture of the philosopher Hegel, whom Marx, the accompanying caption claims, ‘stood on his head’. Marx actually claimed that he found Hegel’s philosophy to be already standing on its head and that he stood him ‘right side up’. In Hegel’s philosophy the real world results from the unfolding of ideas, whereas for Marx ideas arise from and interact within a specific material context. There is no discussion of Marx’s dialectic in the book, from which we must assume it is of no importance. Wheen, by contrast, repeats the common misconception that Marx’s dialectic is a form of logical syllogism: thesis, antithesis and synthesis. But this is precisely the kind of idealism which Marx had rejected after he had stood the Hegelian philosophy of his youth ‘right side up’. It is the understanding of material circumstances, particularly the economics of capitalism, which provides the ‘guiding thread’ for comprehending the world around us.

Both Thomas and Wheen argue that Marx’s legacy is still relevant today. It can also be argued that Marx’s ideas have never been put into practice, and an example of this is suggested by Thomas’s book. At the end of the Franco-Prussian War, in 1871, the Paris Commune was formed. The Commune was an improvised organisation of Parisian workers set up to run and defend Paris. The French army brutally suppressed the Commune and slaughtered at least 20,000 of the Communards. Marx had no input into the creation or running of the Commune and the Commune took nothing from Marx. Afterwards he did write The Civil War in France in defence of the Commune, and from this the press claimed (mistakenly) that Marx was the mastermind or strategist behind the Commune, conferring on him the title ‘red terror Doctor’. Marx for the first time became notorious – but for an event which owed absolutely nothing to him.So apart from the evidence of his own writings, there are historical grounds for arguing that Marx’s legacy has been misunderstood and unrealised. 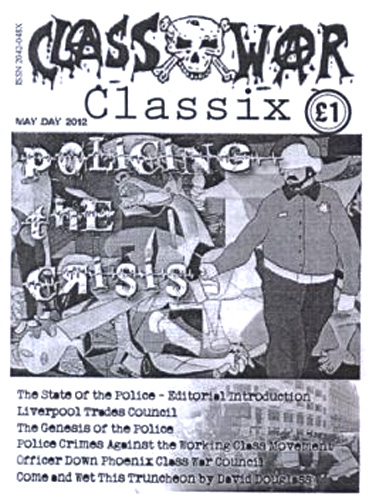 This is a pamphlet published this May Day by the anarchist group known for the photographic series ‘hospitalised coppers’ and pictures of the “Working Class Fights Back” at the 1990 Poll Tax Riot.

The section ‘Police Crimes Against the Working Class Movement’ is a historical survey of the police and the working class in Britain.  Minority class property is why the police exist; the police force is part of the executive arm of the capitalist state, and as such, the enemy of the working class, even if that’s from where its members are recruited.

The pamphlet reproduces Dave Douglass’s 1986 Come and Wet This Truncheon which details police ‘crimes’ against the striking miners, their families and communities during the year-long strike. This makes sobering reading. If read in conjunction with The Secret War Against the Miners by Seamus Milne which details MI5 and Special Branch operations against them, it is quite clear the state is used by the capitalist class against the working class to further its own economic interests.

Like Bakunin, Class War accepts Marx’s class analysis and his economic theories about capitalism. Class War describes how “force is necessary by capitalism to move the developing situations towards a new balance of class relationships more favourable to them. It is never death or pain free”.

As capitalism has become more ‘unfettered’ since the 1980s, the capitalist state has relied more on its enforcers to ensure the new economic relationships are ‘accepted’, and significantly, although statistics claim crime is going down, the prison population has doubled in size in the last thirty years. Today we have austerity economics imposed on us and dissent is ruthlessly dealt with; the police threaten to shoot protesting students; last summer’s social breakdown in the inner cities has resulted in obviously political sentences for ‘rioters’; and the concept of ‘pre-crime’ is now used to prevent any dissent against the bourgeois consensus of the Royal Wedding, Jubilee and the Olympics.

Class War are heirs to Bakunin with their emphasis on the ‘propaganda of the deed’: direct action philosophy, and opposition to taking part in capitalist elections (although Ian Bone, anarchist publisher of Class War, was involved in Bristol local elections in 2003, and Class War plan to stand a candidate for Mayor of Hackney in 2014).

As socialists we reject Bakunin’s love of conspiracy, insurrection and his cult of violence. Marx once described ‘anarchy’ as the ultimate aim of the proletarian movement when classes will be abolished and the power of the state disappears. He can even be said to have anticipated that other historical anarchist Kropotkin in aiming at an anarchist communism which is a stateless, moneyless, wageless society and not a worker’s state.