Too Many People or Not Enough Food Production?

On 31 October the world’s population was said to have reached 7 billion. Would this be a problem in socialism?

The Twentieth Century saw the biggest population increase in human history. This was due in some part to medical advances which lessened the death rate in many countries and to the increase in agricultural productivity attributed to the green revolution. However the UN’s Food and Agriculture Organisation (FAO) considers the perceptions of a continuing population explosion to be false. World population is expected to go on rising but less rapidly than it has been. The birth rate even in poor countries has been falling (for example in Bangladesh where women are on average having three children where their mothers were having six). Annual births in the world have levelled at about 134 million per year since their peak at 163 million in the late 1990s. However, as births still outnumber deaths, the world’s population is expected to reach nine billion between 2040 and 2050. A UN projection suggests that after peaking in 2050 the figure for total population could start falling.

There are debates about the numbers of people the Earth could support. An extravagant example was given in 1967 by Professor Colin Clark who worked out each person’s land requirement for American-type food consumption.  Taking world resources of agricultural land at “10.7 billion hectares of standard land equivalent,” he concluded that this could feed 47 billion people at “maximum standards”. He also estimated a much higher level on a subsistence diet (Population Growth and Land Use, p. 153). The possibility of feeding an estimated figure of between 30 and 35 billion people “with existing technology, assuming it was properly deployed” was attributed to the FAO by Prof. Samuel Preston in a Horizon programme in June 1992 (transcript p.8)

While such projections may serve as a useful contribution to the argument that the size of the population is not the reason people are malnourished, we must not appear to be complacent as to how needs can be met: ‘We are already eating into our capital, collectively consuming the renewable resources of 1.5 planets’ (populationmatters.org).  The best prospects lie with a change to common ownership and democratic control but this also means making plausible suggestions which do not assume socialism as a magic panacea.

Enough
According to the FAO, detailed analysis shows that “globally, there is enough land, soil and water, and enough potential for further growth in yields, to make the necessary [increase in] production feasible.” However, the policy environment has to be favourable to agriculture to make “feasible” become “actual” (World Agriculture: Towards 2015/2030 Summary Report 2003). The report also acknowledges that globally the likelihood is that producers will continue to satisfy “effective” market demand but that this does not help the millions of people who lack the money to buy or the resources to produce what they need for themselves.

It gives the example of China where by 1997-99 the average daily food consumption had reached 3,040 kcal – only 10 percent short of the level in industrial countries. The aggregate food consumption is expected to grow in the next three decades but at only a quarter of the rate seen in the previous three decades, and though the population is also expected to grow during the same period this will be at only a third of the rate of the previous three decades. By contrast there is considerable scope for increase in food consumption in India but, unlike China where the demand for meat has been part of increased food consumption, the cultural traditions favour vegetable diet. A 2006 Interim Report based on UN data and projections also sees indications for a “rather drastic slowdown in world demographic growth” in prospect. The fact remains that in the coming decades food supplies must and will be increased. However, as the FAO admits, if it is within a system of market production, this will still leave millions of people too poor to have secure access to food. A different scenario emerges when market production is replaced with a system where food is grown and processed simply to be eaten.

More land resources are available. For example, Brazil has more spare farmland than any other country, at least 300million hectares. Since 1996 Brazilian farmers have increased the amount of land under cultivation by a third, not in Amazonia, but mostly in the cerrado, an area previously thought to be unfit for agriculture being too acidic. The various methods used have included adding up to five tonnes of lime per hectare, no-till agriculture, and growing soybeans – not formerly a tropical crop.  Cross breeding with a variety of grass brought from Africa has also been used to produce a new variety of higher-yielding grass feed so that the amount of pasture has been extended – likewise the beef herd. Needless to say, the main purpose of this increased production is sale and profit including the export of palm oil. 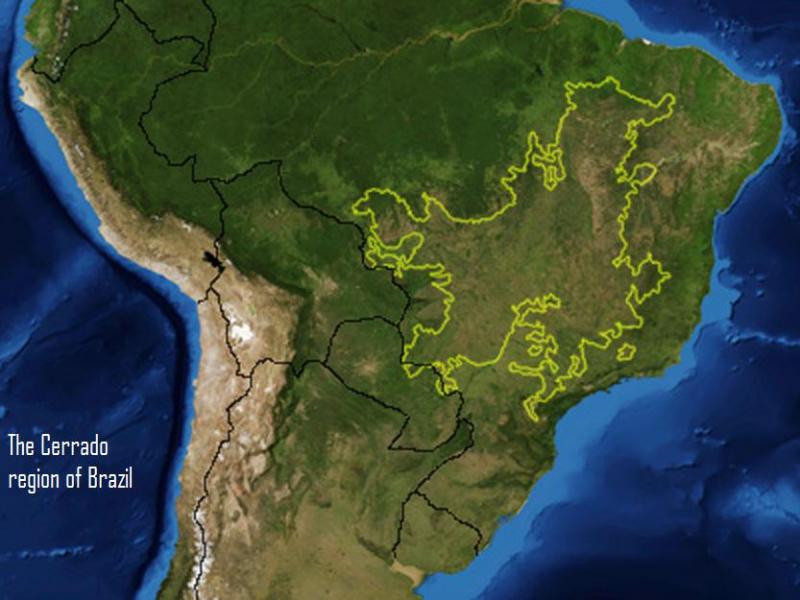 The success achieved in the savannah of the cerrado in Brazil and elsewhere has encouraged the investigation of land with similar problems in other regions. Attention is turning to Africa as having an “abundance of natural resources including water” but very unevenly distributed. The FAO estimates that there are more than 700 million hectares of potential additional land available for cultivation in sub-Saharan Africa. In the Guinea Savannah region – an area twice as large as that currently planted to wheat worldwide – only 10 percent of some 600 million hectares of potentially cultivatable land is currently farmed. (FAO Media Centre: 2050 2009)

Land grabs
In recent years a scramble for land has developed involving some 7.6 million hectares worldwide. This “agri-colonial” acquisition of land means an expansion in production and shows what could be done if the only intention were to feed people. However, the aim is profit and not the meeting of needs. Many hectares of the land acquired are not intended for growing food but crops for biofuel. It was reported in 2009 that a former Wall Street banker had acquired 400,000 hectares of fertile ground in Southern Sudan from a local war lord – with the aim of looking for oil and uranium. Local people lose out in these land deals.

Much of the land grab is taking place in Africa, in Ethiopia,, for example, where the process is encouraged by the government with advertising which includes, “vast fertile, irrigable land at low rent” and “cheap labour” (Irish Times 30 January 2010). Sai Karaturi, a Bangalore businessman and one of the world’s biggest private landowners, has acquired a 50-year lease for 300,000 hectares in Gambella – Ethiopia’s western tip – to farm crops of maize, wheat and rice. Though it was reported in May 2011 that the Ethiopian Government has now reduced the concession by two-thirds, partly to allow for the migration of antelope (Businessweek 18 May). The same report mentioned criticism of Ethiopia’s policy of renting land cheaply to foreign investors to grow cash crops while 13 percent of its 80 million people rely on food aid and domestic farmers are being dispossessed. Investors include companies from India, China, and Saudi Arabia as well as from Ethiopia.

Cash crops
Crops are grown for sale, but the term “cash crops” refers to the need of developing countries to export in order to get foreign exchange. Fresh and processed fruit, and vegetables, fish, spices, nuts and flowers account for half of farm exports from developing countries and are overtaking coffee, tea and rice. In 2003-4 these exports were worth $106 billion.

Perhaps the most obvious cash crop which could be abandoned in favour of food production and without affecting anyone’s diet is flowers. Bangalore businessman Sai Karaturi – through Karaturi Global, an Indian company and the world’s largest producer of roses – has flower farms in both Kenya and Ethiopia producing 1.5 million rose stems daily for European markets (The East African 14 July 2008). Only 40 percent of the flower farms in Ethiopia are owned by Ethiopians. Power cuts could be a problem for flower growers there, but power is guaranteed to flower farms, which are given priority over other businesses including manufacturers of porridge and feeding paste for malnourished children. In Kenya, ranks of greenhouses and fields are devoted to producing flowers as well as high value crops such as green beans and peas for European consumers. In Columbia, millions of roses are grown for Valentines Day bouquets. Drought and a drop in the market affected the flower growers in 2009 especially in Uganda.

So, while reports warning about food supplies continue, population growth is not the problem that it is suggested to be: the rate of population growth has slowed, and although there will still be a sizable increase in population in the coming decades and a need to increase food production, there is the potential to increase the amount of land under cultivation, which a socialist society freed from production for profit will permit.
PAT DEUTZ