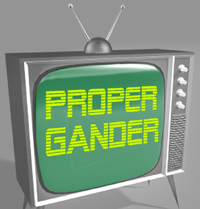 IN THE dark corridors beneath the Chilcot theatre, Gordon Brown has finally caught up with Tony Blair. He raises his gun and Blair tries to talk his way out of a tight situation one last time: “I think you’ll make a great Prime Minister. You’ll love it. The girls. The parties. Power’s a great aphrodisiac.” Brown doesn’t listen and, trembling, he pulls the trigger.

And so marks the end of Blair’s escape from those who turned on him, as 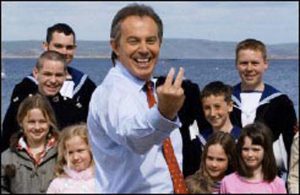 imagined in The Comic Strip Presents: The Hunt For Tony Blair. This enjoyable one-off reunited the team who have been making short comedy films since Channel Four’s launch in 1982. Previously, their output has included both the miners’ strike and Ken Livingstone’s takeover of the Greater London Council filmed in the style of Hollywood blockbusters. The Hunt For Tony Blair developed this approach by presenting Blair’s downfall as a 1950s film noir.

On the run for murder, he finds himself abandoned by his previous allies, including a sinister, camp Peter Mandelson who changes sides to help Blair’s pursuer, Inspector Hutton. He’s even rejected by George W Bush, here depicted (probably for the first time) as a mafia godfather out to “fuck Iraq”. But the most memorable performance is from Jennifer Saunders, playing Margaret Thatcher as a faded movie star. Lying on a chaise longue, she reminisces over old footage of the Falklands War before seducing Blair in her four-poster bed.

Keeping the satire this loose allows the Comic Strip team to get away with scenes like Blair pushing Robin Cook from a mountain during “a friendly walk in the Highlands”. But elsewhere, the film skirts closer to reality, especially in Stephen Mangan’s spot-on portrayal of Tony Blair as someone too self-satisfied to accept his guilt as a murderer.