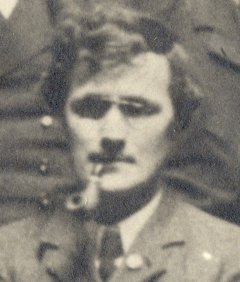 Britain received from T. A. Jackson a deeply significant letter of resignation, neither resentment nor anxiety arose in the breasts of those who heard the pitiful epistle. Knowing the man’s particularly bad circumstances, generous sympathy and pity came uppermost. Hoping that he might pass into oblivion without prejudice to the working class and Socialism we contemplated no action against him. This was not to be, however : Jackson has taken the pay and has to pipe the tune called—to wit, the mal-education and betrayal of the working class. So much to show that in publishing this exposure we are not animated by stupid feelings of spite, resentment or revenge.

We make no excuse for using every weapon to hand : as between feelings of old comradeship or the conventions upon the one hand and the well-being of the working class on the other, the Socialist can but choose the latter.

Information has reached this office that T. A. Jackson is now actively engaged speaking from the Clarion Vans and the platforms of the “Independent Labour” Party. However unfortunate this may prove for the I.L.P., etc., does not much concern us : the duty of exposing a budding “Labour-fakir” and incidentally the removal of a false impression, is our reason for dealing with the matter in these columns.

Speaking for the I.L.P. in North London recently Jackson delivered himself to the following effect with reference to the S.P.G.B. “He had been in the Socialist Party but he had got tired of being out in the political desert. After four years he found he was wasting his time, so he as he had always done, no matter what the cost—had come outside as he was after the truth and the right and he would hold by that to the end in spite of all obstacles. He had lost many friends, but principle with him came first, etc.” He then endeavoured to ridicule the charges made by us against the I.L.P. by referring to their age, but not once did he attempt to deny the truth of them. His whole effort was calculated to give his hearers the impression that he had gone over because he sincerely believes the S.P.G.B. wrong and the I.L.P. right. But from correspondence in our possession we are able to prove that T. A. Jackson believes nothing of the sort. He knows that the S.P.G.B. is the Socialist Party, and alone worthy of the support of the workers. He knows that our attitude toward other parties is correct. He knows that our charges against them are true. But T. A. Jackson left the Socialist Part of Great Britain because that Party does not buy men to stay in it.

In his letter of resignation he makes it abundantly clear that it was the hope of getting money for his services that induced him to join the “enemy,” as he terms the I.L.P.

Jackson penned another to one of our comrades that is nothing short of a cynical presumption of our comrade’s disloyalty to the working class. In this letter (Jackson, by requesting destruction of the letter sought to make our member an accomplice in treachery) he emphasises his guilt and makes the whole matter clear as a pikestaff. After referring to his own poverty and the prospects of “jobs and money” by belonging to the I.L.P., S.D.P., etc., he says ” SO I WILL JOIN THE S.D.F., I.L.P., AND “CLARION” MOBS AND PEG AWAY—BLEED THE SWINES—TILL I AM EXPELLED.”

More need not be said. Jackson, has joined the ranks of those whom he formerly called “labour bleeders.” He has become one of them and has left sufficient evidence to prove it. His letters above referred to deal also with other matters and are too long to print in full—unless Jackson wishes it; while should any interested in the matter doubt our bona-fides arrangements can be made for the inspection of the originals at this office.