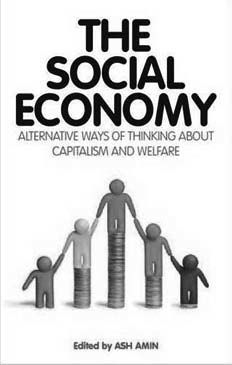 The concept of social economy is a rather vague one, and is not helped by the use of other terminology (such as ‘solidarity economy’ or ‘third sector’) to refer to the same or similar notions. Broadly, though, it describes the provision of goods and services by organisations which are neither profit-making and privately-owned nor run by the state, whether national governments or local authorities. It covers, then, at least workers’ co-operatives and various voluntary groups.

Amin argues that the present recession is an opportune time to consider alternatives to the profit system. With case studies from Italy, Poland, the Philippines, the US, Canada, Argentina and Brazil, this volume presents a spectrum of different examples, from workers taking over bankrupt companies to housing co-ops and small farmers getting together to market their own produce. The question which arises, though, is the extent to which what is described here really does constitute a ‘third way’.

It is a widespread finding that wages are lower in social enterprises than in others. A survey from Italy, however, suggests that employees in the social economy are on the whole more satisfied with their work than other workers, largely because of the importance they assign to social usefulness and helping disadvantaged people. On the other hand, social enterprises have to behave like ordinary capitalist concerns in many ways: there is still wage labour, those who arrive late for work can have their pay deducted, and enterprises may close if trading conditions are not favourable.

But many social enterprises do show that workers can organise themselves and run production without bosses and employers telling them what to do and ordering them around. It must be acknowledged, though, that this does not mean leaving capitalism behind, since they function within the capitalist economy and indeed are often supported by governments. The editor writes of ‘making money, markets and the productive system work for human development, ecological preservation, spatial equality and collective fellowship’. Noble goals, but only achievable without money and markets.

No Way To Save An Economy 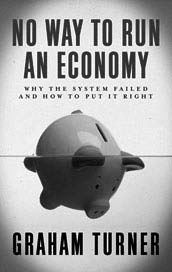 This is the sequel to Turner’s The Credit Crunch reviewed in last April’s Socialist Standard. The book is essentially a Keynesian tome advocating quantitative easing, low interest rates and nationalisation of the banks as a way of dealing with the onset of financial crises like the most recent one.

Much that was both positive and negative about The Credit Crunch applies here too: there are some very useful graphs and statistics presented even though the general case for Keynesianism is necessarily weak. What is more interesting is that now there appears to be a partial and belated recognition of this that creeps into the analysis as the book develops. The chapter entitled ‘Structural Causes of the Recession’ in particular illustrates something of a shift in thinking to the effect that there may be something about capitalism that is fundamentally flawed in the way Marx had argued. Some of the discussion presented at this stage isn’t bad; if there is a problem it is that too much emphasis is placed on the recent decline in the share of the national product going to labour in countries like the US, meaning that allegedly consumption and profits can only be maintained in these circumstances through the extension of credit. He hedges his bets somewhat but ultimately argues that in pursuit of profits:

‘Companies are engaged in a competitive struggle, but the compression of wages will undermine the ability of consumers to buy and absorb the goods and services being produced. The contradictions with capitalism will eventually be exposed when consumers can no longer buy all the goods being produced’ (p114).

This neglects the fact that, as Marx pointed out, it is more typical for the share of wages relative to profits to rise as the boom nears its peak and that the inability of the working class to buy back all that is produced is not the cause of economic crises (if that was the case capitalism would be in permanent crisis). Ironically, Turner reproduces a key passage from Volume II of Marx’s Capital to this effect in the Notes at the end of the book, but clearly hasn’t applied or understood this point when formulating his own analysis.

Indeed, a fair part of his discussion of Marxian theories of economic crises seems to have been adapted from writers like the late Chris Harman of the SWP. This is not entirely surprising given the SWP’s own attempts to integrate aspects of Keynesian ideas within a Marxist framework, such as with the permanent arms economy argument as an explanation of the post-war boom, one which Turner seems appreciative of.

In fairness, Turner is at least starting to ask the right sort of questions in this book, though a realisation that crises within capitalism are caused by the drive to accumulate profits in a competitive environment where there is no planning between enterprises but an anarchy of production instead, would lead him to a clearer and different conclusion. This is that no amount of Keynesian intervention, monetary reform or redistribution of income can prevent the market economy’s periodic slide into chaos.

This is an English translation of a pamphlet originally published in Germany, with the subtitle “Some additions to the Marxist-Leninist crisis theory.” ‘Marxism-Leninism’ was the official political theory of the former Soviet Union and was enforced throughout most of the former Eastern European satellite governments of the twentieth century. ‘Marxism-Leninism’ is often synonymous with Stalinism.

Engel gives a reasonable account of the current global crisis of capitalism, which began in September 2008.  Crises are inevitable under capitalism because, as Karl Marx pointed out, “a rift must continually ensue between the limited dimensions of consumption under capitalism and a production which forever tends to exceed this immanent barrier” (Capital, Vol. III). German chancellor Merkel, like politicians everywhere, blamed the “financial excesses with no sense of social responsibility, the abandonment of moderation and the middle course by a number of bankers and executives” which “steered the world into this crisis”. As Engel rightly says, this way of arguing “turns attention to the – undeniable – subjective failings of bankers and executives, and distracts attention from the essentials, from the laws of the capitalist mode of production. These laws compel every capitalist, whether factory owner or manager of a stock corporation, whether privately owned or state-owned company, to act, under penalty of ruin”.

But it is the ‘Marxism-Leninist’ understanding of the state, among other things, where it falls down. Engel quotes Engels on the state:

“The modern state, no matter what its form, is essentially a capitalist machine, the state of the capitalists, the ideal personification of the total national capital. The more it proceeds to the taking over of productive forces, the more does it actually become the national capitalist, the more citizens does it exploit. The workers remain wage-workers – proletarians. The capitalist relation is not done away with. It is rather brought to a head” (http://www.marxists.org/archive/marx/works/1880/soc-utop/ch03.htm).

This should have made Engels (and Marx’s) position abundantly clear, but Lenin stood this argument on its head and claimed that capitalism and the state could be made democratic and that this is what socialism means. Engel cites a passage from a pamphlet written by Lenin in 1917:

However, the whole thrust of Marx and Engels’s critique is that capitalism and the state, whatever form they take, can never be made to serve the interests of the whole people. For the same reason, the idea of a “socialist state” is a nonsensical contradiction in terms. Lenin was never clear about the need for a “socialist state” as he knew it flouted the basics of Marxism, though it is implicit in some of his writings. Leninists have no such qualms and here we read of the need for a “socialist state of genuine democracy”. But  Leninist states have an abysmal record on democracy, preferring instead a dictatorship over the proletariat as they grapple with the contradictions of managing capitalism. In theory and in practice, ‘Marxism-Leninism’ is a shambles.