Were Trotsky alive today, he would have the editors of this book shot. It is riddled with irritating errors. Round brackets close square; names change spelling; weird sentences like the idea that Russian radicals “took the bits of Marxism they disliked and discarded the rest” slip through; and apparently Oslo and St. Petersburg lie on the same longitude, 59 degrees North. Macmillan should be ashamed to have allowed this slapdash product into print.

This would not matter except that the representatives of Trotsky on Earth have launched a flurry of chaff to attack this biography of their idol. Forensic hair splitting has been their method, and finding faults, such as that Natalya Sederova (Trotsky’s partner) died in 1962 rather than 1960 as the book claims. This is, of course, a distraction tactic. Hardly any of their reviews deal with the meat of the book.

Peter Taaffe, leader of the “Socialist Party” (formerly Militant) performs the usual Trotskyist miracle of simultaneously denying and justifying the repressive tactics and terror of the Bolsheviks. David North of the World Socialist (sic) website cavils over trivialities, and even manages to accuse Service of anti-Semitism. North also has the lack of originality to describe Service’s text as part of the ‘School of historical falsification’ echoing his hero’s riposte to Stalin.

They don’t address Trotsky’s ordering the decimation of a battalion for cowardice. Or Lenin signing an order for 100-1000 leading citizens of a city to be hanged. The book notes Trotsky’s willingness to use authoritarian methods, and suggests that prior to 1917 he never spelled out what he meant by dictatorship, but that during the crisis leading to the Bolshevik coup d’Etat, he would speak in praise of the guillotine that made opponents of the revolution “shorter by a head”.

Service depicts, with accounts from witnesses, Trotsky as an aloof and self-centred man, who lacked political judgement to help him keep friends close. He alienated many by his manner. He was never, contrary to the received wisdom and dogma of the sects, an organised Marxist. He was a non-aligned member of the Russian Social Democratic Party, who spent the years up to the Great War trying to unify the factions but never joining any. Even when he joined the Bolsheviks, it was as a loose cannon, and that would be part of his undoing.

Service attributes Trotsky’s failure to become the leader of the revolution after Lenin to a lack of will on his part – and claims that any obstacles were surmountable. He suggests that Trotsky was not planning, nor might have been able, to use his position of head of the Red Army to seize power: but that the fear of this motivated his opponents.

What sticks in the craw of the Trots, and threatens the entire ideological edifice of their movement, is Service’s contention that Trotsky did not in policy terms differ from Stalin, and that he had indeed consciously presided over the introduction of a series of show trials of opponents like the ones used by Stalin against Trotsky’s allies. Further, he examines Trotsky’s late claim that the “backwardness” of Russian development was to blame for the “degeneration” of the revolution. In that case, enquires Service, was not the whole enterprise, including all its shed blood, a forlorn waste of time?

Despite the claims of the acolytes, this is not an entire hatchet job, Service freely acknowledges that Trotsky was a great writer and orator, and a brave man in his own personal right. It is, though, a biography, as much a literary form as an historical one, and judgement plays an important part. Service gives his opinion, and is openly critical of Bolshevism and the reader can make up their own mind.
PS

The Philosophy of Money

This is an unusual book, written by a hedge fund manager. It verges between conventional orthodoxy and the highly unorthodox. In many respects it is as much a book about philosophy, thinking and perception as it is about economics, and not unlike recent works by George Soros in that respect.

Lonergan has read Marx, Hayek and many of the key financial analysts of the contemporary era, from Markowitz to Shiller. He has provided a synthesis of their views about markets and money, underpinned by his philosophical readings from his earlier academic studies. These at times border on the insightful but ultimately disappoint.

His discussion of inflation is an obvious case in point. As early as the first chapter he writes:

‘Many people believe that their money is stored in a safe at the bank, if they think about it at all. Ignorantly, we think of a deposit with a bank as money; indeed, in most of economics deposits are referred to as “money”, and are categorized as such in official statistics, which is misleading. Deposits are not money: they are loans we make to banks’ (pp.11-12).

This is quite true and one of the reasons ‘credit creation’ ideas still peddled by some economists are erroneous, along with theories which try to explain rising prices with reference to the expansion of bank deposits. However, he also says:

‘…the solution to a banking panic is effortless and disconcerting: a central bank merely needs to say that it will create as much money as is needed, and provide this to the banks, and everyone should calm down’(p.12).

Later, he writes of ‘an irrational fear of inflation’ (p.133), but these fears are not necessarily irrational. This magazine has chronicled for decades how an excess issue of inconvertible paper currency (beyond that needed for production and trade) leads to an artificial bloating of monetary demand known as inflation. This has been a consistent phenomenon since the late 1930s/early 1940s and in some periods, such as at times in the 1970s, has been quite significant.

At present, the extent to which a tactic like ‘quantitative easing’ can lead to cost price bubbles and can lead to an excess note issue will be the extent to which underlying inflationary pressures will re-emerge with a vengeance within the capitalist economy. Lonergan clearly missed the relevant chapters in Marx’s Capital where the inflationary process – and the explanation for it – is discussed, or has at least failed to apply it to the contemporary situation. It would certainly help explain to him why inflation is a monetary phenomenon created by governments through central banks which cannot, of itself, solve any of the other economic problems endemic to capitalism.
DAP 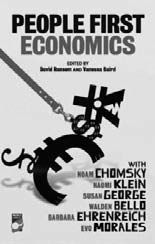 Here is a book with contributions from twenty or so well-known writers, economists, politicians, activists and professors; inspiration for readers who seek to be part of a ‘fairer world’. In one way or another all the contributors succeed in pointing out major flaws in the capitalist system and all have their ideas on how many things could be improved to work better for more people. Recurring themes include restructuring the tax system, transparency in the tax system, putting an end to corporate tax dodging, closing tax havens, prosecution of the guilty, cancellation of Third World debt, protection of the environment, reducing inequalities, investing in sustainability. I don’t recall an example of a call for a non-capitalist alternative, just adjustments although some of them quite major.

A former derivatives trader possibly overcome by guilt or remorse reveals the predator/prey relationships in banks and finance companies. ‘Replacing the interest-based money system is the critical struggle of our time. It is not a system we can reform. We must simply defeat it because if we don’t it will defeat us.’ How it will be possible to defeat the interest-based money system is left open to conjecture but as he reveals in his article no-one was interested in taking up his new ‘debt-free’ home finance product because debt expansion is more profitable than debt reduction. He is listed as a financial adviser.

Other suggestions are to regulate and control, to put social services back into the hands of communities, away from the market, to use local currencies, to expand the commons and to share the common wealth. The closest we get to a socialist alternative comes from Nicola Bullard, an Australian researcher, campaigner and writer with ‘Focus on the Global South’ who reminds us that Marxists (and some others) agree that capitalism destroys nature and alienates society but that the main objective of the G20 is to put it back on its feet again after the recent ‘crisis’. Her way forward is three-fold: expand the common good by decommodifying goods and expanding open-source; cool the planet by using appropriate agricultural methods, and share the common wealth – meaning a fairer sharing of profit between labour and capital, tax reforms etc. She ends by proposing that it should be possible for all to live in a system of economic production and consumption where the commons is for all and wealth is shared by all but owned by none.

The chapter ‘Equality is better – for Everyone’, written by Richard Wilkinson of the University of Nottingham Medical School and University College London and Kate Pickett of the University of York and the National Institute for Health Research and taken as an edited extract from their book The Spirit Level: Why More Equal Societies Almost Always Do Better is interesting in its focus on various measures of well-being. What they show is that the wider the difference in monetary terms between rich and poor in any society, the greater are the problems within those societies, from rates of mental illness, teenage birth rates, prison populations, distrust of others within society, life expectancy and murder rates, which confirms that socialism (a more equal society will not be found) should be hastened and welcomed by all.

The final three chapters focus on climate change but again largely promote regulation and reform and the final paragraph of the final chapter pretty much sums up the tone of the book, ‘The current movement…is an opportunity to be ambitious, to challenge the central precepts of the capitalist system at its roots and replace it with a new set of economic power relations founded on principles of justice, redistribution and collaboration’ – as if to say that money can be retained but a new system can be organised around it without the negative aspects that now abound.

There are plenty of optimistic suggestions but you would have to believe that those who currently have the power – corporations, the mega-wealthy and their media and puppets in governments – are actually seeking such a wide-ranging, inclusive solution for it to have any possible chance of success. If this were the case then they would surely have already been working towards it.
JS