The publisher’s blurb on the back says: “This book truly changed the world, inspiring millions to revolution.” Unfortunately, this is not true: this book has not changed the world, nor has it inspired millions to revolution. The Manifesto of the Communist Party (to give it its original title) has been republished many times since its first publication in 1848. And now, 160 years later, in this edition it has a new Introduction by David Harvey. The Manifesto needs to be understood in its historical context, in order to sift out the immediate demands of 1848 from its timeless communist content. Marx and Engels emphasised this point in their 1872 Preface where they argued that already part of the Manifesto dealing with immediate demands (at the end of Section Two) had become “antiquated”, a point which was repeated in the 1888 Preface.

Harvey acknowledges this point but then goes on to claim that some of these immediate demands – such as free education for all children in state schools, a heavy progressive or graduated income tax – are still “wholly sensible proposals … to rid ourselves of the appalling social and economic inequalities that now surround us”. But that was then and this is now: however progressive those reforms appeared then, it is clear now that reforms of capitalism do not reduce social and economic inequalities. Harvey argues that eradicating class privilege requires an organised association of workers backed by democratic control of the state, and then adds in brackets “this is as far as the Manifesto goes”. But this is untrue: in the paragraphs preceding the immediate demands the Manifesto calls for the revolutionary “communistic abolition of buying and selling” and other specifically communist demands. Astonishingly, Harvey has nothing to say about this.

Harvey refers to the collapse after 1989 of “actually existing communisms” without irony and asserts that the former Soviet Union succumbed to “capitalist counter-revolution”. But there is nothing in the Manifesto which would warrant such claims. The Soviet Union and similar regimes did not institute the abolition of buying and selling and are best characterised as state capitalist dictatorships over the proletariat. Harvey has an online course “Reading Marx’s Capital” (http://davidharvey.org/), but in this Introduction he alleges that crises can be brought about through underconsumption (lack of effective demand), an economics theory which Marx emphatically rejected. Harvey’s Introduction is very disappointing, but the Manifesto itself is still an inspiring read.

In a world of privatisation and globalisation, it is perhaps only to be expected that combat and security activities should also be outsourced. Private military companies are being increasingly used to guard both people and places.

Oil companies, for instance, are starting to set up their own private armies. Aramco is establishing a security force to protect oil and gas fields and pipelines in Saudi Arabia, while the Russian parliament has given permission for gas and oil companies to raise corporate armies of their own. But for the most part it is a matter of private companies that hire their employees out to corporations and governments, companies like Sandline and Blackwater. The latter has its own vast training camp in North Carolina and possesses helicopter gunships and armoured personnel carriers.

The invasion and occupation of Iraq has fuelled the growth in private military companies. In 2006 there were 100,000 private contractors (as they’re called) in Iraq, and Donald Rumsfeld regarded them as an official part of the US war machine. They have increasingly taken on combat roles, and in September last year a Blackwater convoy killed seventeen Iraqi civilians in Baghdad.

Contracting out security tasks supposedly frees up government soldiers to do more actual fighting, though the private forces are, as just seen, getting more involved in combat operations. It is also claimed that they perform a useful service because new states may not at first have properly organised armed forces of their own. They also mean big profits for their owners, partly brought about by hiring cheap labour from Latin America, including former thugs from Pinochet’s Chile. And like other companies, they are concerned about their image: one boss interviewed here says, ‘Even though it was making us lots of money at the time, we took a view of Iraq and the margins and felt it was dragging our brand down.’

If any contractor is killed or injured, the company employing them will fight tooth and nail to avoid paying compensation. The soldier’s family will find their struggle made far more difficult by the complex web of ownership: a person from country X, fighting in Y for a company based in Z but officially registered elsewhere.

Making a profit from war is perhaps the ultimate expression of the profit motive. Armstrong’s book gives a good account of these developments, though notes and/or references would have made it more useful. And the publishers have a nerve charging this much for a 250-page paperback that doesn’t even have an index. 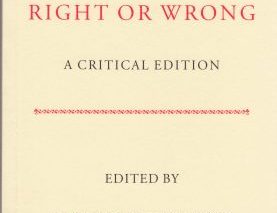 Before he became a socialist in 1883, Morris had been a Liberal, towards the end on its Radical wing. As such he was in favour of trade unions, reforms to help the working class and a non-aggressive foreign policy. As this is the text of a talk given in January 1880 he was then still a Liberal, as can be seen from his praise of Gladstone as “a great statesman” and his raising of the Liberal slogan of the day of “Peace, Retrenchment and Reform” (“retrenchment” being what today would be called “cutting back on government spending”, a policy the modern Liberals have recently re-adopted).

Basically, this is a plea for opposing your country’s foreign policy if it is “wrong”. So, not “my country right or wrong”, but only “my country if it is right”, by which Morris understood anti-imperialist and anti-war. For him, Britain, under the then Tory government of Lord Beaconsfield (Disraeli), was wrong to support Turkey against Russia in the Balkans, to attack the Zulus in South Africa and to invade Afghanistan (which ended in disaster). Incidentally, in saying that Britain should oppose Turkey (because of its massacre of Christians) Morris was taking up the exact opposite position to that taken by Marx (who thought Turkey should be supported against Russia), not that Marx is a model to be followed here.

Later, after he had become a socialist (partly from disillusionment with the Gladstone Liberal government that came to power later in 1880), Morris argued that war and imperialist adventures could not be avoided by a change of foreign policy – a moral or ethical foreign policy was impossible under capitalism, a lesson the “Stop the War” movement of today has yet to learn.

Florence Boos, in her introduction (which is as long as the text), argues that Morris’s position at the time was influenced by the 19th century peace movement, whose origin and history she outlines. She seems to exaggerate the extent to which Morris could be regarded as a pacifist. After all, the chapter “How the Change Came” in News from Nowhere does envisage violence even if started by the ruling class. But she does quote from a lecture on “Communism” that Morris gave in 1893 in which he argues:

“The change effected by peaceful means would be done more completely and with less chance, indeed with no chance of counter-revolution . . . In short I do not believe in the possible success of revolt until the Socialist party has grown so powerful in numbers that it can gain its end by peaceful means, and that therefore what is called violence will never be needed.”

That’s not a bad way of putting it.