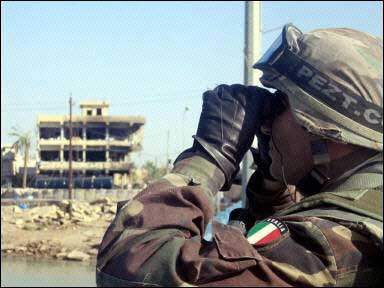 During a recent visit to Baghdad, US hawk Paul Wolfowitz, the brains behind the US invasion of Iraq, told a press conference that the “main problem was that there were too many foreigners in Iraq”. For many in Iraq there are indeed “too many foreigners”. Over 134,000 of them are wearing US combat uniforms and their casualty rate is growing in the world’s newest guerrilla war.

The US is keen to put down the idea that this is in fact a guerrilla war, that there is real resistance to the US occupation. However, according to Iraqi sources there are some 40 plus organisations resisting US occupation, from Baathists and “Communists” to out-and-out nationalists and religious factions. Moreover it is not the work of Islamic jihadists crossing the borders of Syria and Iran in the name of Allah, but appears to be largely indigenous, comes from all levels and sections of society and is very much de-centralised – and this, military experts tell us, is the first stage of a guerrilla war

One military intelligence spokesman in Iraq has suggested there are 50,000 insurgents in Iraq. Another Washington military analyst, having received a copy of the recent internal CIA document ‘Appraisal of the Situation’, described it as a “bleak assessment that the resistance is broad, strong and getting stronger.” The report, he claims, suggests “we are going to lose the situation unless there is a rapid and dramatic change of course. There are thousands in the resistance – not just a core of Baathists. Not all those people are actually firing, but providing support, shelter and all that.” (Guardian, 13 November).

In early November, guerrilla forces brought down a Chinook helicopter, killing sixteen soldiers and two weeks before that successfully destroyed two M1 Abram tanks. On 12 November a suicide bombing of a military base in Nasariya left 25 dead, including 18 Italian troops. Classic ingredients of your run–of-the-mill guerrilla war.

Oil pipelines are beings sabotaged almost on a daily basis and it is becoming a full time job for the authorities in Baghdad to massage the statistics and hide the reality of the oil pipeline attacks from the outside world. Apparently it is only when a camera crew actually captures such sabotage on film that it is reported.

Robert Fisk, commented in the Independent on 7 October on the serious concerns the US has for dwindling revenues from oil flowing north, said:

“The cost of making it flow could produce an economic crisis in the US. And it is this – rather than the daily killing of young American soldiers – that lies behind the Bush administration’s growing panic. Washington has got its hands on the biggest treasure chest in the world – but it can’t open the lid. No wonder they are cooking the books in Baghdad”.

The Bush administration promised this would be a quick war and that Iraqis would be dancing in the streets celebrating their liberation. In truth, there have been far more US troops killed since the since the war “officially” ended than were killed during the combat phase itself, and those Iraqis dancing in the streets do so around smouldering US helicopters and tanks.

In recent weeks there has been a move in the US to focus attention away from the Iraqi quagmire and onto domestic affairs – whilst the latter is also a dire cause for concern, it is less a disaster than the operation to “liberate” Iraq.

Chief US civilian administrator, Paul Bremer, who heads the Coalition Provisional Authority, remarked at the beginning of November, rather pathetically it would seem, that life in Baghdad is back to normal. By all accounts life under US occupation is is at least as bad as under Saddam. There is little, if any, tangible reconstruction and mass unemployment except for the re-recruitment of Iraq’s previous Baathist security forces to help maintain law and order. According to the Ministry of Labour out of a population of 25 million, 12 million are now looking for work.

There were initially plans to bring in Indian and Pakistani troops to help police Iraq and speed up the “liberation” process, but those countries then expressed doubts and declined. Turkish troops were proposed, but the Turkish government, faced with domestic resistance to the idea, also demurred. Poland may send troops, but it is to be bore in mind that opinion polls (no pun intended) show there is much opposition to the idea. Even Italy may even reconsider its position now in light of the recent attack upon its own forces.

A present Washington strategy for the malaise is “Iraqification” (after Vietnamisation), or in other words the training of 170,000 Iraqi soldiers, police and border guards and dropping the sorry mess in their laps. But even this has its problems as such forces have already been attacked as “collaborators” and there is a tendency for guerrillas to recruit from within such security forces, making them extremely vulnerable. Furthermore, would Iraqi soldiers shoot, or detain their fellow Iraqis on behalf of US capitalism plc?
Of course invading armies have met such resistance throughout history – whether it be the British, French or Americans. The attacks upon US troops in Fallujah in recent weeks are no different to those suffered by the French at the hands of Algerian guerrillas and the US conscripts in the jungles of Korea and Vietnam. The US response at the moment is to retaliate with heavy air strikes and armoured assaults on suspected guerrilla targets, a move that some fear will only heighten support for the insurgency and further destabilise the region.
If anything, these past seven months since Bush announced his victory in Iraq have revealed that oil is not priced in US dollars, but in human blood. It casts its shadow of death indiscriminately, sparing none – women and children, UN worker and Red Cross worker, Iraqi policeman or US soldier alike. Washington believed the US take-over of Iraq would be easy and that the petro-profits would soon be flowing stateside. What they did not count on was having to fight a drawn out guerrilla war to secure Iraq’s black gold.