Why you shouldn’t vote state capitalist

Why You Should Vote Socialist. By Paul Foot, Bookmarks.

Paul Foot is a good journalist, who specialises in exposing capitalism for not living up to its own standards. For this his fellow journalists chose him as “campaigning journalist of the decade”, even though he seems to have got it wrong about Hanratty. But let’s not be too churlish. Despite being a member of the SWP he’s a good writer and the first 50 pages of this 60-page pamphlet are an excellent demonstration of the truth of the old saying “Labour, Tory; Same Old Story” in relation to the Blair government.

Blair and his team have pursued the same policies as the Tory governments of the 80s and early 90s, not just on economic matters, which anyone with a knowledge of how capitalism works could have predicted (as we did, but not Foot – he voted Labour in 1997) but also on civil liberties, where governments have some leeway.

It’s in the last two chapters that Foot goes off the rails. He correctly states:

“Under capitalism, unemployment, inflation, the rise and fall of booms and slumps, are not brought about by governments, but by economic forces beyond government control.”

“Elected governments of whatever colour cannot and do not determine what happens to the international capitalist economy unless they embark on the most determined and ruthless economic intervention” (emphasis added).

It is just such a policy of state intervention to try to control capitalism that Foot advocates on behalf of the Trotskyist “Socialist” Alliance and the Scottish Sheridan Party (with which the SWP has just merged its Scottish section) who, together, are contesting a third of the seats in the present general election (in most other constituencies Foot says people should still vote Labour!). But, if tried, this would provoke an economic crisis and, if persisted in, would lead to an autarkic state capitalism with shortages and rationing as in Cuba and North Korea.

The alternative to capitalism is not “determined and ruthless” state intervention but socialism, a world-wide society of common ownership, democratic control, and production for use not profit. But Foot doesn’t offer this, not even as a long-term aim. Instead, he accepts a curious definition (by Michael Barratt Brown) of socialism as a society where, among other things, “housing would be available at reasonable rents” and “pensions for the aged and invalid, and payments during sickness and unemployment would be provided on a universal scheme based on contributions related to income”. In other words, the Old Labourite dream of a reformed capitalism. Perhaps Foot never really did vote Labour without illusions.

Reasons To Be Cheerful. By Mark Steel, Scribner, 2000. 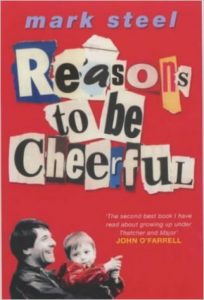 “Shame he’s a trot”, was the recurring thought permeating through my mind as I read Mark Steel’s otherwise pleasurable Reasons To Be Cheerful. Packed full of anecdotes and witticisms about his twenty years as a political activist, it’s something any long standing Socialist Party member can relate to.
Throughout the book, Steel clearly comes across as someone who is genuinely moved by the horrors of global capitalism but unfortunately this potential socialist joined the anti-working class Socialist Workers Party which is an integral part of capitalism’s left-wing.
After rejecting the Communist Party for being “too right wing”, the main attraction of the SWP was that one did not have to suffer the indignation of defending the USSR as it was “state capitalist” – a theory pioneered in this country by the Socialist Party. Of course, it would be asking too much for any recognition but it is a shame that Steel’s political development ended so prematurely.
From here we are taken on an amusing tour of some of the most significant political events of the last two decades of which Steel played “an extremely minor role”. Highlights include getting caught up in the Brixton riot – returning to his boring office job to tell his politically uninitiated colleagues that he had got up to “nothing much” at the weekend, and his recent Socialist Alliance candidature for the Greater London Assembly where he feared he would hear the words “Mark Steel – 103”.
Such jollities notwithstanding, Steel continually spouts leftist poison such as equating socialism with full employment and referring to “old” labour’s “socialist clause four”. Not surprisingly, he does not even mention the SWP’s non-existent internal democracy nor the fact that they intend to preside over a one party state. Even so, if you fancy some light political reading which gives the occasional belly laugh you will not be disappointed.

The Power of Gold: The History of an Obsession . By Peter L. Bernstein. John Wiley & Sons, New York.

The author is president of his own economic consulting firm and author of seven books on economics and finance. He is also well-connected with powerful establishment figures, citing for example in his foreword the “significant assistance” of such as Alan Greenspan and Milton Friedman. In addition he also acknowledges the assistance of half-a-dozen researchers. So what is the outcome of such an undertaking into a fascinating subject? There is an astounding collection of stories, anecdotes and speculations on the subject of gold that embraces Biblical legends, Greek mythology, medieval nonsense and modern received wisdom, but nowhere will you find an explanation of what determines the value of gold.

The researchers have obviously been assiduous in their set tasks of tracking down just about every reference to gold they could find in Ancient and Modern History. No expense has been spared in tracing what Moses, Job, Herodotus, St. Thomas Aquinas, Pizzo or Newton had to say on the subject. But nowhere a mention of what determines the value of gold. We can understand that Bernstein and his team of researchers would ignore the ideas of Karl Marx, because of their background and aspirations, but it is a pity one of them hadn’t taken a day off from his research and spent an afternoon in a local cinema watching a rerun of The Treasure of Sierra Madre.

He would have seen the Humphrey Bogart character bemoan to the old prospector in the flophouse about how it was a pity gold was so difficult to find, and the Walter Houston character reply, “Many men search for gold, very few find it. Therein is the value of gold.” It’s as simple as that. The value of gold is determined, like all other commodities, by the amount of socially-necessary labour time spent in its production.

If you want a lot of colourful anecdotes about some of the crazy things people have said and done about gold, then this is the book for you. If you want to know something about the value of gold, and how is determined you would be much better employed reading the 100 or so pages of Part 1 of Marx’s Capital, Volume 1. Alternatively look out for the next TV rerun of The Treasure of Sierra Madre.