Book Review: ‘The Economics of the Madhouse’

‘The Economics of the Madhouse’, by Chris Harman (Bookmarks, £3.50) 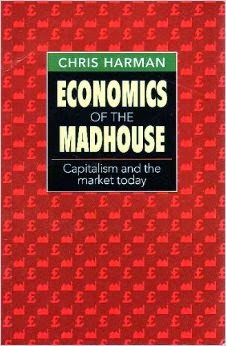 This is a well-rounded and generally well-written criticism of the modern capitalist economy and the economists who are paid to defend it. It deals with exploitation, economic crises, globalisation and many other issues of interest in a manner socialists are likely to generally agree with. As might be expected from the leading economic theoretician of the SWP, there are the usual nods in the direction of the Permanent Arms Economy as an explanation for the post-war boom and towards the allegedly socialist nature of the Russian Bolshevik coup d’etat, but these are only fleeting references and therefore only appear as minor irritants.

Harman’s criticism of contemporary reformism echoes much of ours, in particular his claim that today’s Labour Party does not offer unlimited beneficent reforms of the system so much as “reformism without reforms”. Above all, Harman makes plain that far from the Labour Party having changed the market economy, it is the market economy that has changed Labour. Now Labour doesn’t even pretend to be the party of the working class and offers little if anything distinct from the Conservatives.

Given Harman’s eloquent description of the failure of capitalism across the planet, readers could be forgiven for thinking he is an advocate of common ownership and production solely for use as the solution to the problems created by the market. Far from it, Harman is actually more graphic than most SWP’ers in his claim that the answer to the “economics of the madhouse” is, er . . .  more economics of the madhouse. Viz:

“The day after the socialist revolution, as the day before, the great mass of people would go to work in factories and offices, and would be paid in money for what they did . . . It will in fact take many decades for people to learn to control consciously very many of the mass of productive processes that take place in a modern society, and in the interim they will have little choice but to put up with the old market mechanisms” (pp.103-4).

This serves to blow Harman’s criticisms of the Labour reformists out of the water because the SWP is here shown to be reconciled to the insanity of the market just as much as they are. The explanation offered for this—that the working class would not know how to operate and organise production without the capitalist class and their system to guide them—is simply bizarre, un-Marxist nonsense. The working class already operates capitalism from top to bottom and long ago, as Engels pointed out, capitalism reduced the bulk of the owning class to the status of economic parasites, tearing off their share coupons and gambling on the stock exchange without taking any real part in the processes of production and distribution. If Harman claims that the introduction of production for use must be held back for “decades” because of the inability of the mass of the population to operate society, he is duty bound to tell us which functions the capitalists are able to perform that the rest of us can’t. He is duty bound to, but, given the SWP’s reticence to debate with socialists and their evident confusion on this topic, we somehow imagine that he wont.