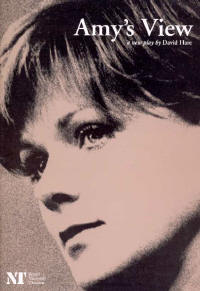 Amy’s View by David Hare
In the early 1980s David Hare wrote a play called A Map of the World. A bleak, realistic piece its centre was a United Nations conference on poverty, which was taking place in a sumptuous hotel in India. The poor were literally dying of starvation on the doorstep, whilst inside the great and the good discussed food shortages with full stomachs in five-star luxury.
Hare’s plays are consistently located in the here and now. And whilst other playwrights might focus on particular, and perhaps trivial, matters. Hare is concerned with the broad sweep of ideas and behaviours which mark out life at the present time. His characters are both true to themselves and also revealing of the spirit of the times. They are unique individuals who nevertheless have a symbolic function. What they say and do, and how they think and feel, tell us something both about themselves and also about people generally. Perhaps more than any other contemporary playwright Hare’s plays offer us a map of the world; or at least a map of the so-called developed world. Amy’s View (National Theatre. Lyttleton) is no exception.
It is 1979 and Amy brings her new boyfriend. Dominic, to visit her mother. Esme, a well-known actress. Amy’s view of the world is simple; “You have to love people.You just have to love them.” But Amy singularly fails to persuade mother and boyfriend of the virtues of this imperative, with almost predictable consequences. Over the years mother and boyfriend find reasons to fight, especially about television, films and the theatre. Others become enmeshed in their squabbles: by 1997 mother has become a victim of “the market”, and boyfriend/ partner a beneficiary.
Hare is too knowing and complex a dramatist for easy analysis. Amy’s View may be said to be about a strong mother and a loving daughter, about growing old. about the uncertainties of life, and so on. and to an extent this is the case. But more than this it is about living in the 1980s and 90s, and being exposed to particular features of life in capitalist Great Britain. And it is clearly a paean to the theatre and an attack on the dumb, gratuitous violence which is such a feature of modern filmmaking. Dominic has become a success by making some Tarantino-like blockbuster, and this prompts Esme’s final outburst:

“I did see the film. I’m appalled by the violence. I know it’s important to people like you. All that shooting and bloodshed. But I don’t understand it . . .  It isn’t as life is. Perhaps I’m just getting old. I’m tired of it. Dominic. This need you all have to get out the guns. and bam! And wham! And ‘kill the little fucker’ and ‘shoot off his stupid bloody head’. What is it? What is this need you have now? What happened? Are you just bored? Or is it that you don’t dare deal with real experience . . .  with the things that really go on in real life? . . .  Like grief . . .  and betrayal . . .  and . . . “

The question hangs in the air. Hare, like all good dramatists is leaving work for the audience to do. Is cinema unredeemably lost—the Hollywood dream factory incapable of anything other than alienating violence, absurd fantasy, and empty whimsy? And if so, why is this? Socialists would have tentative “answers” to such questions based on their analysis of the capitalism and the function of “cultural products” in a capitalist society.
And socialists would also have answers to the other question which Hare leaves hanging in the air. Why is Amy’s view apparently flawed? Why isn’t love enough? Socialists would argue that loving actions need to be informed by knowledge and insight. Young adults becoming parents for the first time recognise very quickly that if they are to love their offspring they need to know what best to do to keep their child healthy and happy. Loving a baby carries with it implications about adults making knowing decisions about what is good for children: decisions which are based on knowledge of what babies need in order to develop. More generally, if we care about people and their well-being, we will do what we can to meet their needs. This means being familiar with what is in their interests: what economic and social conditions are likely best to ensure their development as healthy and happy human beings. One way we can care about other people is by trying to help them understand the world in which they live, and how we might collectively change it so that it provides a more caring environment for us all. And one merit of Amy’s View is that it faces the audience with such questions. Another is that it does so in ways which are always involving and entertaining, and which take the audience and its capacity for thought and reflection seriously.
Note: Hare’s earlier play Skylight, which I discussed in last May’s Socialist Standard, has returned to the Vaudeville Theatre in London. Here is something very special: a play which resonates in the memory. One critic called it “the play of the decade”. It’s a plausible description.
Michael Gill