Book Review: ‘What Is Situationism?’ 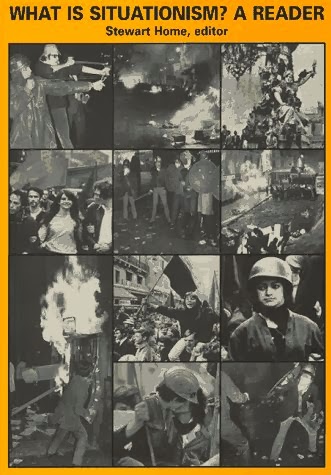 This is an occasionally interesting though somewhat repetitive collection of writings about the strand of revolutionary opinion which emerged out of Lettrist and other avant-garde artistic groups, principally in France in the 1950s. With their radical critique of bourgeois consumer society the situationists influenced to a greater or lesser degree both the May events in France of 1968 and then, nearly a decade later, the punk rock movement.

Famously, in 1966, a group of situationist-inspired students at Strasbourg University were elected to positions of responsibility in the moribund Students’ Union and immediately set up a Society For The Rehabilitation of Karl Marx. They also published various radical tracts including Khayati’s On The Poverty of Student Life using unions funds, for which they attracted public outrage and eventually the attention of the police. At their trial the judge summed up situationist philosophy as well as anyone had hitherto ever done, stating “these cynics do not hesitate to commend theft, the destruction of scholarship, the abolition of work, total subversion, and a world-wide proletarian revolution with ‘unlicensed pleasure’ as its only goal”.

Though lacking a coherent revolutionary strategy, the situationists stood out clearly against the market economy, commodity production and wage labour, advocating the creation of a socialist society of common ownership where production would be undertaken solely to satisfy needs and desires. This book doesn’t explore this concept as well as it might do, however, and nothing is as well-rounded as Mark Shipway’s presentation of the subject in the book Non-Market Socialism edited by Rubel and Crump. Probably the best chapter in this collection of writings is “The End of Music” by Dave and Stuart Wise, dealing with Malcolm McLaren’s Sex Pistols, the rise and fall of punk rock and its relationship with situationist politics—the other writings range from the quirky (Jim Martin on Wilhelm Reich and situationism) to the near pretentious (Jean Barrot’s text being the most obvious example). This said, there are far worse books around that you could add to a collection on radical politics.