Spare us the confusion 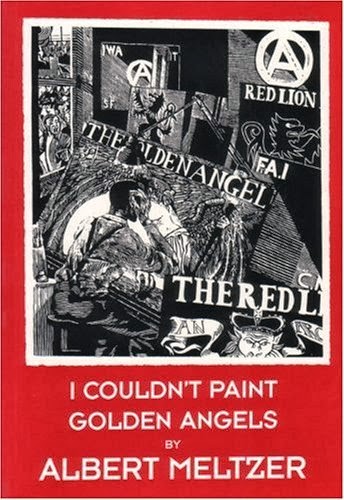 This is a confusing book full of confusing and ill-conceived statements. Ostensibly the autobiography of one of Britain’s most well-known anarchists, its anecdotal nature overrides any pretensions to serious political thought. Lip-service is paid to the goal of a classless, stateless society very occasionally but it is no more than just that.

Meltzer is a self-styled ‘man of action’ of the anarchist movement whose protégé, Stuart Christie, was famously convicted of terrorist offences; in this book action for its own sake is lauded to the skies, without apparent consideration of its effectiveness in achieving Meltzer’s ultimate goal. In truth though, Meltzer has always been horribly confused on the issue of how to bring about a classless society – despite his many other undoubted qualities – so this is unsurprising enough.

His political confusion can be illustrated by his description of the old Independent Labour Party as an organisation with a “revolutionary socialist programme far beyond the grasp of most of its membership”. Quite what he can have had in mind in writing this is difficult to say as anyone with any revolutionary and anti-statist credentials whatsoever during the ILP’s hey-day must have realised that it was a reformist organisation through and through.

Meltzer also writes of the Russian dictatorship that “What reigned in Russia was not capitalism nor communism but the state in control of everything. Some dissident Communists introduced as an alibi a fiction that State Capitalism existed in Russia but all that oppresses is not capitalism”. It is not indeed, but where class division, commodity production, wage labour and capital accumulation out of surplus value exist, then it’s a pretty safe bet by anyone’s book. And, of course, the theory of state capitalism was not introduced as an “alibi” by dissident communists, but as an original analysis based on the facts by the Socialist Party of Great Britain.

For some peculiar reason, when Meltzer talks about the Socialist Party on a couple of occasions, it is in the past tense and he writes that we were “a small sect of dogmatic socialists” founded “around 1910”. For this he can get no other than nought out of ten for both originality and research, though ten out of ten for cheek, as Meltzer has spent all his political life in British anarchist groups like Black Flag and the Direct Action Movement which have made the SPGB look like a veritable mass party.

Frankly, when Meltzer writes of his admiration for Socialist Party orator Tony Turner when stopping to listen to him speak in Hyde Park at the outbreak of the Second World War one is left wishing that he had stayed a little longer and listened more intently, if only to spare us some of the confusion now.