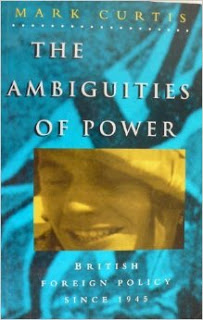 This is an important book. It is a well-documented and researched critique of post-World War II British foreign policy, based mainly on formerly secret  government documents and independent sources, showing how all British governments, Conservative and Labour, have been concerned not with promoting democracy and human rights but with defending capitalist profits and spheres of future investments, often using the most brutal and violent means, mainly in what has been termed the Third World. Moreover, Britain has also largely acted as the willing partner of United States imperialism.

Following the War, the Labour government fought a long and vicious war, in an attempt to retain control of Malaya and, of course, the country’s rubber plantations. Later, this time a Conservative government, fought to defend white minority rule in Kenya. When a democratically-elected government of British Guyana came to power, it was first suspended and, later, with assistance from the American CIA, was overthrown. And, during the 1950s, Britain, again in co-operation with the CIA, overthrew the Iranian government of Dr Mussadiq, this time on behalf of the Anglo-Iranian Oil Company, in which the British government was a part-time owner.

In 1956, Britain, in an alliance with France and Israel, invaded Egypt because that country had nationalised the Suez Canal; and in 1957, British forces came to the support of the barbaric regime of the Sultan of Oman. In this instance, Shell owned 85 percent in Omani Oil. Much the same occurred in Kuwait in 1961, in which British Petroleum owned 50 percent of the Kuwaiti Oil Company, again in co-operation with Shell. As later, in 1990, the villain of the piece was Iraq.

In 1966, Britain signed a defence deal with the United States, leasing the Indian Ocean island of Diego Garcia to the US for 50 years, on the condition that the people living on the island be removed. They were then forcibly sent to Mauritius where they were left to exist in extreme poverty.

And so it continued.

Curtis shows how Britain has supported such terrorist movements as RENAMO and UNITA, in co-operation with South Africa, in Mozambique and Angola; and has often given active or passive support to the United States in Chile, Guatemala, Grenada and Nicaragua. He also gives detailed evidence regarding both the suppression of news, and propaganda on behalf of British intervention by such as the Times, the Independent and the Daily Telegraph. The Guardian generally escapes such criticism.