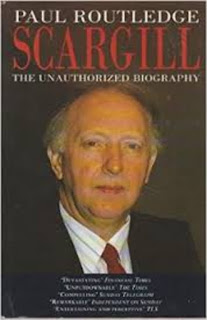 Arthur Scargill arouses mixed feelings in Socialists. On the one hand, he is one of the few public figures who says things we can agree with. For instance: “History is littered with abortive attempts to reform capitalism. You cannot reform this system out of existence. What we need is a complete and utter change of society” (p. 261) He even once told an incredulous (then plain Mr) David Frost that he stood for a moneyless society (Daily Mail. 19 September 1983). On the other hand, [he] sees himself leader with the presumption and arrogance that goes with this.

Scargill’s background was with the old Communist Party (he was a member of its youth section and stood as a candidate for them in local elections in 1960). He inherited from them the anti-socialist idea that what the workers require is the right leadership — in the case of the Yorkshire miners, his leadership.

Routledge makes out a convincing case for saying that Scargill left the CP only because he felt that membership would stand in the way of his ambition to be a leader of the Yorkshire miners’ union. Alter leaving he still retained their mistaken conception of socialism as state capitalism on the Russian model. Even today his political position is nearest to that of the faction of the old CP that brings out the Morning Star.

He is also a bit of a syndicalist in the sense that he believes that workers should take mass industrial action, not just to get higher wages and better conditions, but also to bring about political and social change. Not that there is any evidence that mass industrial action has been able to override the economic laws of the profit system any more than can the reformist parliamentary action he derides.

In fact even as a trade union leader Scargill has been a distinct failure. It was his misfortune to realise his ambition of becoming president of the NUM at a time when coal was being outcompeted by other fuels and so doomed to decline as a capitalist industry. No doubt the miners had to go on strike in 1984 but the tactics adopted meant that when they were forced back in 1985 they were completely defeated: not only did they not obtain any concessions on the speed of pit closures (the most they could have hoped for) but their ability to fight another day was undermined by their split into two rival unions. After that it has been downhill all the way.

Paul Routledge, it has to be said, emerges as nasty a character as he paints Scargill to be. During the strike the State seized the assets of the NUM. So the national officials decided, quite legitimately, to set up a parallel, secret fund. Naturally these funds couldn’t be properly audited. When the capitalist press discovered this, led by Robert Maxwell (who, it later emerged, knew a thing or two about how to get his hands on unauthorised funds) they cried “scandal”, “corruption”. Although Scargill was exonerated of any charge of misappropriating union funds for his own personal benefit, Routledge repeats this allegation a number of times while only mentioning in passing the exoneration. This is despicable and the mark of a capitalist journalistic hack.