Book Review: The Illusion of Choice 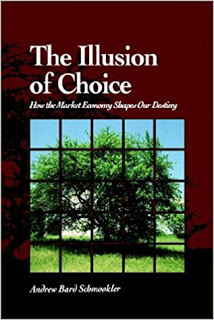 The Illusion of Choice by A. Schmookler, State University of New York, Albany. 1993.
Subtitled “How the market economy shapes our destiny”, this book mounts a devastating attack on capitalism. Schmookler shows how the market is deaf to the voices of those without money with which to express their needs. Capitalist “justice” does not require that anyone in the marketplace invest capital or labour to cure the ills of people in the Third World who have nothing to give in exchange.
The market is sensitive to the needs we have as “social atoms” but it disregards the needs we have as a social community. Despite all the goods and services individuals can buy if they have the money, “there is no place you and I can go to buy a clean environment, a coherent landscape, an intact social community”.
Those who run capitalism — ironically, unless they own considerable wealth, they are workers — do not actually seek to discover what consumers need. They offer consumers what they can be persuaded to want from among commercially viable choices. A good illustration of this is Nestle’s campaign to persuade Third World mothers to buy infant food. Breastfeeding was a better choice for women and their infants. “But this superior and naturally available option involves no sale and makes no companies rich. The market system is adept at blunting all threats to its continued dominion. Schmookler recalls seeing, in the midst of the youth rebellion of the early 1970s, an advertisement in San Francisco for a new style of clothing which was recommended for “the revolutionary look”. The author is oddly split-minded about the possibility of abolishing capitalism. In one mode “I more or less accept the world as it is and feel comfortable in it. In the other, I feel an acute awareness of how out of joint the world is”. Like so many radical critics of capitalism he pushes the needed revolutionary change into the future:

“Ultimately, it is probably necessary to change our entire concept of property and the rights that adhere to property where the resources of the earth are concerned . . . The market system . . . is not the end of history. The systems failure to align with the forces of life makes its eventual transformation inevitable, for those forces will continue to seek fulfilment.”

Why not be really revolutionary and join those forces now?
Stan Parker