Farewell to the Middle Class

In an article entitled “White Collar Wasteland’, U.S. News and World Report (28 June) informs its readers that “For the first time on record, white-collar workers have surpassed blue-collar workers in the nation’s unemployment lines, and many of the casualties are still reeling”. These were the complacent salary slaves who were duped into believing that life under capitalism would be rosy for them if only they deluded themselves that they had a stake in the system. They wore the slave’s badge of honour as members of the non-existent middle class. Although the US recession was ’officially” declared to be over in 1991, today the number of unemployed white-collar wage-slaves stands at over 3.1 million: 300,000 more than when the recession was recognized as being on.
US salary-slaves who have kept their jobs are finding cuts in pay and conditions to be the price they must pay for their precarious freedom to be employed. According to the New York business research group. Conference Board, over half of all white-collar workers finding new jobs after an average of six months of job-hunting had to take pay cuts. This is what is known as the freedom of the market place: the freedom of the exploiter to kick a man when he’s on the ground looking for a few dollars to pay the mortgage with.
The great problem of the so-called middle class — who sell their labour power to the highest bidder — is that when the boss needs them no longer, as is happening now that world capitalism is in a deep recession and managers are also being thrown on to the scrapheap, they have further to fall than the average wage slave. Capitalism never offers workers a break without there being an inbuilt catch.
The semi-brainwashed loyalty of these white-collar salary slaves is pitiful to perceive. The present writer spent a recent train journey to Swansea sharing a table with two pathetic specimens of corporate dedication who spent nearly three hours in passionate discussion as to how best they could boost their boss’s profits. The faith of such corporate corpses in the economic interests of those whose prosperity rests upon their exploitation would be comical were it not so tedious to overhear and so tragic in the extent to which it stifles the lives of the true believers. One such believer is described in the above-mentioned article: a $40,000-a-year salary-slave for IBM, 30 year-old David Shahbazian was called in to the ‘human resources” office one day and told that he was ‘a surplus employee’ (their words). Now on the scrapheap, he says “I felt insulted, betrayed . . . I never missed a day, I believed in the white shirt. I placed on IBM a higher trust”. No doubt if a socialist had told him that he was living in a highly unstable, insecure system where IBM’s capitalist owners were only interested in exploiting him to make profits he would have responded a few months ago with ridicule or contempt. But we can still feel sorry for the sucker. He’s learning the hard way. So too is Jim Turner, out of a job now after having made $60,000 dollars a year in IBM computer sales. He tells how his family spent Christmas at Disney World in Florida where he spent most of each day on his cellular phone selling computers for IBM. “I breathed IBM, ate IBM, I went for it hook, line and sinker”, he now says. Replace the initials IBM with the word “capitalism’ and there you have the biographical tragedies of hundreds and hundreds of thousands of men and women who once dreamed of being middle class and are now wage-slaves without wages.
In Britain the same hopes of middle-class affluence, fostered by the lying propaganda of the Thatcherite “property-owning 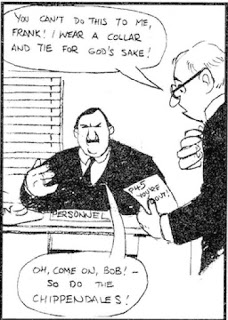 democracy”, are now being seen for the illusions that they always were. Record business bankruptcies, accompanied by all of the force of the law against the failed entrepreneur and all of the humiliation of financial failure, has hit countless thousands. Ten years ago they were the complacent dupes of “the enterprise culture”. To have told them they they stood no real competitive chance against the banks and the multinationals would have been dismissed as mere socialist scaremongering. Now they have had to learn the hard way that workers can never beat the capitalists at their own game. The only serious option is to change the game.
Memories of the housing boom, when banks were lending money for mortgages with the zeal of a drug pusher in a hostel for crack addicts, are now nightmares for tens of thousands of workers who imagined that they were becoming “home owners”. They had not entered the kingdom of ownership, but signed up for the prison of debt. According to the Council of Mortgage Lenders, in 1992 the British banks and building societies took 68,340 properties into repossession. By December 1992 a record 332,030 households in Britain had mortgage arrears of six months or more. And last year county courts in England authorized 33,263 possession evictions — with a further 64,642 suspended eviction orders, giving an indication that the present housing crisis is by no means over.
The system of production for profit can never operate in the interests of the majority. Many workers have a sense that this is the case, even if they are not yet conscious of production solely for use as a feasible alternative. But there is still a minority of workers who are deceived, not least by their own illusory ambition, into thinking that capitalism will allow them a place in the sun. The harsh fact which they must learn is that the difference between the most affluent “middle-class” worker and the poorest of wage-slaves is smaller than the difference in power, security and privilege which divides the richest worker from the poorest capitalist.
There are two classes in society: the ones who need to work and the ones who don’t; the ones who make the profits and the ones who take them; the ones who can say “This world belongs to us” and the rest of us — the overwhelming majority who have world to win.
Steve Coleman