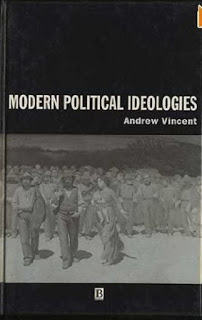 Starting with the origin and history of the concept of ideology, through Marx’s and Engels’s differing uses of the term, Vincent gives an analysis of its contemporary usage: a set of beliefs which has a view of society and how it ought to be. He then gives, from an unstated liberal viewpoint, detailed accounts of the “traditional” ideologies—liberalism, conservatism, socialism, anarchism, fascism—including accounts of feminism and ecologism, in all their manifold complexity.
Of particular interest to us is the chapter on “socialism”. Some insights are revealed:

despite the fact that Marxism is often regarded as a deeply statist doctrine . . . one looks in vain within the corpus of Marx and Engels’s writings for any positive theory of the state. What one finds is an overwhelmingly negative analysis of the state.

But Vincent’s liberal standpoint leads him to look with favour on something that has been called “market socialism”. Enough has been said in this journal about this contradiction in terms. It has to be said, however, that this concept illustrates a problem which pervades the whole book, and other books like it, the assumption that politics completely overrides economics. It is almost as if all that is needed to live the good life is to discover the right political principles and then live by them. But the global economic system, as Vincent partially realizes, is based on the accumulation of capital out of profits. When, as now, there is a widespread failure of profitability with its resultant social distress in terms of increased unemployment, poverty, ill-health etc, political principles can be rendered null and void. Even when the profit system is working “normally” it offers severe problems for most people: problems which governments are largely powerless to prevent or cure.
Vincent pulls together a lot of information which socialists will find useful. However, for a politics which is balanced with an understanding of the economics of capitalism just keep reading the Socialist Standard.
Lew Higgins