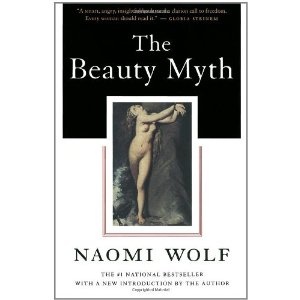 “Stay young and beautiful/If you want to be loved” runs the old song. Naomi Wolf’s The Beauty Myth is, among other things, a book about the way women and men are manipulated by a system based on property and profit. She covers in depth the various manifestations of an imposed and unpredictable beauty ideal for women—at work, in the media, in health and most importantly as a hugely inappropriate low self-esteem felt by, probably, a majority of women.

Women have traditionally been seen to be vain, that is, overly concerned with their appearance. What has not been recognized is the extent to which this “vanity” is in fact a manifestation of a feeling of personal inadequacy. Women feel inadequate to the task of matching the latest fashionable ideal of “beauty”, the achievement of which, alone, can make them feel acceptable—to their lovers, the world at large and to themselves.

This ideal has varied from the voluptuous Rubenesque-type figure to the anorexic “Twiggy” of the ’60s and ’70s. Whatever it is at any one time it can never be achieved by most women, since all women vary in size, shape and appearance.

Naomi Wolf puts the problem down to two phenomena—one is the power relation between men and women and the other is the demand of commerce. Women’s lack of self-esteem serves any desire men may have to control women’s lives, since someone with low self-esteem is more manipulable than someone who is confident. It also serves the demands of commerce, since the sale of beauty products and plastic surgery is dependent upon women feeling they are nor beautiful enough as they are. 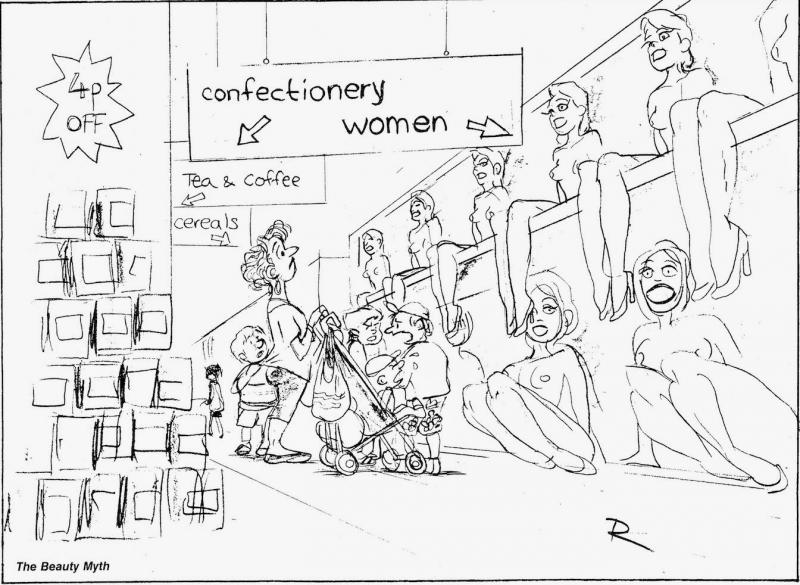 Any desire on the part of men to control women’s lives needs to be regarded seriously as it is a threat to the possibility of democracy and equality between all people and hence represents a serious obstacle to the achievement of socialism. From a young age, males are taught that in order to be “masculine”, that is, in order to feel adequate, they must dominate women, or at the very least, appear to.

Keeping someone’s self-esteem low is the one way of maintaining dominance and the impossible demands of the beauty myth serve this purpose well. The wish to dominate women is very much tied up with property. It is likely that, with the emergence of property society, women came to be regarded as men’s property alongside land, animals, slaves and so on. One of the main features of a piece of property is that it (she) is under the owner’s (his) control.

The property basis of relations between men and women is constantly under threat, since women are on the whole strong and intelligent human beings whom men often feel inclined to genuinely love and respect. The lengths to which societies have gone to keep women under control, are quite extraordinary—clitoradectomy, foot-binding, malnutrition, enforced childbearing, institutionalized wife-beating, death by stoning . . . the list is endless. The demands of “beauty” represent just one, primarily psychological, means of control.

The other thread of the problem is peculiar to late 20th century capitalism; the requirement of business to make money has led to the development of highly advanced psychological manipulative techniques. The beauty ideal is being thoroughly exploited in this respect.

Naomi Wolf has this to say on the subject of ageing in women:

“When grey and white reflect in her hair  . . . you could call it silver or moonlight  . . . she is darker, stronger, looser, tougher, sexier. The maturing of a woman who has continued to grow is a beautiful thing to behold.”

The point of this passage is to show the extent to which we are usually manipulated into seeing the ageing process in a negative way. Men and women alike are conditioned to see “beauty” and hence “loveability” in a woman within the framework of an ideal which involves looking “young” and “slim”. The extent to which women will go, and in some cases are expected to go, to try and fit this ideal, is frightening.

Cosmetic surgery in the USA is commonplace and is being commercially pushed in Europe. Cosmetic surgery involves a good deal of pain and actual damage to the human body. It has occasionally been fatal. It affects the physical health of the person undergoing it adversely. “If your ad revenue or your seven figure salary or your privileged sexual status depend on it, it [ageing in women] is an operable condition”.

The main reason for this is 20th century capitalist commercial practice.

The magazines are dependent for revenue upon advertising and the editorial content of the magazines must reflect this. A magazine which does not push “beauty” is threatened with loss of revenue from advertising. Cosmetic surgery is the latest ghastly trend in this scenario.

Naomi Wolf’s proposed solution is another wave of feminism. Like the trades union movement, the feminist movements of this century have been useful in fighting for improved conditions within the framework of capitalism. However, as with trade unionism, feminism’s successes are always under threat of sabotage or outright reversal. The real solution to women’s oppression lies within a framework of a completely different economic system, one not based on property and the pursuit of profit.