Book Review: ‘Dare To Be A Daniel – A History of One of Britain’s Earliest Syndicalist Unions’

‘Dare To Be A Daniel – A History of One of Britain’s Earliest Syndicalist Unions’. by Wilf McCartney. Kate Sharpley Library, BM Hurricane, London WC1 3XX. 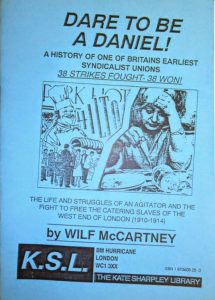 The misery of wage slaves exploited in the catering business has always been particularly bad. Although Wilf McCartney’s twenty-four page booklet on the subject, written originally in 1942 and published in 1945 with a preface by Orwell, is written in a workmanlike, sometimes poorly-crafted style, it expresses well the plight of the catering workers then and now. Reading it, what is clear is just how little has changed. It has always been a notoriously hard occupation to unionize, based mainly on casual and cheap foreign labour, and McCartney shows how little the official trade unions did to support catering workers. Reports of minor successes in rank-and-file strikes are written up encouragingly, but the hard fact is that catering workers are still being robbed blind by hotel and restaurant bosses despite earlier militancy.

Politically, McCartney’s radicalism was of a pretty confused nature. Of relevance here is that he joined the SPGB in its early (not as a founder member) and makes the following critical comments about his experience:

“I and others joined this party to learn socialism, but later, along with H. Maslin [surely, H. Martin—editors] and others, we left because of a letter in the Socialist Standard signed “Upton Park”. The questioner wanted to know what would be the action of a member of the SPGB elected to Parliament, and the answer was that the Socialist member, backed by the revolutionary votes outside, would consider capitalist measures on their merits! This was quite enough for us.”

McCartney is here referring to one of the most historically interesting formative conflicts in this party. The Socialist Party was formed to advocate socialism and nothing but. We have always rejected any compromise with the capitalist system. In 1910 some members, interpreting this principled anti-reformism as a dogmatic opposition to all reforms under capitalism, put their point by writing a letter to the Socialist Standard signed “W. B. of Upton Park”. The reply given to them was that a single socialist or a minority of socialists elected to parliament on the basis of whether such measures benefitted or harmed the working class. For example, if measures extending the freedom of socialists to disseminate ideas or reducing election deposits or banning religious control of schooling were on the agenda it is quite possible that a socialist minority would be instructed to vote for them.

The minority within the SPGB formed a Provisional Committee to oppose this policy. Like dogmatic sectarians, inspired by doctrine to dismiss social reality, they went as far as to argue that no reforms have ever helped or could ever benefit the working class. The exchange of documents between the Executive Committee, expressing the position which we maintain today, and the ultra-sectarian Committee, of which McCartney was possibly a member, is highly educative and explains well why our party is opposed to reformism but not to reforms.

Many of our opponents on the Left, embarrassed by our unceasing exposure of their own rotten reformism, have tried to attack the Socialist Party by attacking what is actually the position of the few members of the Provisional Committee who left this party precisely because we do not hold the view in question. McCartney did hold that view, left the SPGB and went on to join the Syndicalist Propaganda League which was soon to disappear into the mists of history. What a pity that a man of such evident passion and union militancy did not stay within the ranks of the one revolutionary party committed to the abolition of the wages system.