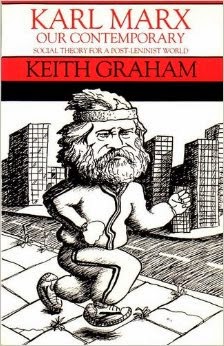 Marx is our contemporary, argues Keith Graham in this book, in that he analysed not just 19th century capitalism but capitalism in general, and capitalism, unfortunately, is still very much with us.

Graham’s approach is that of what has come to be called “analytical Marxism” which consists on analysing what Marx wrote to get at the logic of his line of argument and then to see where this leads, as well as identifying, and even correcting, any inconsistencies.

Graham applied this technique both to what he calls Marx’s “general theory” (basically, the materialist conception of history, how societies are structured and change) and to his “special theory” (of how capitalism works and how it can be abolished). Light is thrown on various problems of interpretation of Marx. For example, what did Marx mean when he wrote about property relations becoming a fetter on the development of the means of production? Is it the class struggle or the development of the productive forces that is the motor of change from one form of society to another?

Graham also discusses Marx’s concept of class and its political implications. Marx adhered to the principle that “the emancipation of the working class must be the work of the working class itself”. So do we (it is incorporated into our declaration of principles). So do many others. But the sort of action this commits you to depends on how you define “working class”. Which is where the disagreements and misunderstandings begin.

One view defines the working class as, essentially, only manual workers who actually physically manipulate raw materials. This is the popular view and also that of non-Marxists who define class in terms of occupation and way of life. It has definite political implications, as Graham points out:

“If it [the working class] is identified with those engaged in manual labour, it constitutes a small and probably shrinking proportion of the population. And, as Przeworski puts it, ‘A party representing a class which has fewer members than the other classes combined cannot win electoral battles’. This identification would therefore militate against acceptance of democratic political structures.”

As a minority within society, the working class would not be able to use democratic political means to emancipate itself and so would have to reject majority action and favour some other means, such as industrial action.

Another view holds that Marx defined class in terms of class consciousness and political organisation. Graham quotes David McLellan who says that for Marx “a class only existed when it was conscious of itself as such, and this always implied common hostility to another social group”, and Ralph Miliband who argues that “for Marx, the working class is not truly a class until it acquires the capacity to organize itself politically . . . without consciousness, the working class is a mere mass”.

Graham argues, convincingly, that Marx rejected this view. Marx defined class in terms of a social group’s material circumstances (relationship to other social groups with regard to control over and access to means for producing wealth) not of their consciousness. He gave an objective not a subjective definition of class. The working class were the working class, by virtue of their position in society, even if they were unaware of being a class.

So how did Marx define working class? Graham has no difficulty in showing that Marx did not restrict the working class to skilled and unskilled manual workers. First, Marx introduced the concept of the “collective worker” as all those workers who, within the social division of labour, contributed in way or another to the productive effort; this would include those engaged in activities which at a lower stage of technological development would have been done by the same person as actually worked the raw material—planning, researching and co-ordinating the work—and so embraced engineers, researchers, draughts-people, their back-up clerical staff and other such “white collar” workers.

But, even apart from this, Marx defined the working class as the class of those whose economic circumstances (exclusion from ownership of means of production) compelled them to sell their ability to work for a wage or salary, including those dependent on them and those unable to find an employer. This included clerical workers, civil servants, teachers and even managers (who Marx referred to as “a special kind of wage labourer”). In a country like Britain we are talking about the overwhelming majority of the population, well over 90 percent of people in fact.

If this overwhelming majority is the working class that is to emancipate itself, then the political strategy for achieving a classless society can live with, and make use of existing democratic political institutions, limited and distorted as they are and must be under capitalism. As Graham puts it:

“If you believe that the proletariat is in the process of becoming the majority class in society, and if you believe that this class is the only practical agency which can be expected to carry out and consolidate the desired transformation to the future society, then you have strong grounds for favouring democratic values. Universal suffrage and majority rule will be congenial institutions in that regard.”

This was why Marx always supported action by workers to secure the franchise, as the Chartists in Britain, and urged those who had got it, as in France, to transform universal suffrage “from the instrument of fraud it has been up till now into an instrument of emancipation” (“Introduction to the Programme of the French Workers Party”, 1880).

Graham brings this point out well in his book, which can be highly recommended to those who  want to understand what Marx was trying to say on this and other subjects.