Riots and anger on the streets of LA. What ignited the flame? The frustration of poverty. In the USA today one in five families live below the official poverty line; the majority of these are non-white. The American Constitution claims that all men are born equal but in 1992 black workers stand more chance of being in prison than in college. In Washington DC 42 per cent of blacks between the ages 18 and 35 are either in prison or on parole. In Harlem, New York City, the life expectancy of a black male is lower than in Third World Bangladesh.

The riots have added fuel to various spurious theories about violence in society. White socio-biologists, wedded to outdated notions of human nature as determinants of anti-social behaviour, have argued that rioters are over-endowed with violent genes. For example, Mark and Irvine Violence and the Brain published with the support of the US Law Enforcement Assistance Agency argue that:

“The kind of violent behaviour related to brain malfunction may have its origins in the environment, but once the brain structure has been permanently affected the violent behaviour can no longer be modified by manipulating psychological or social influences.”

Perhaps the authors of this crass rationalisation can explain why such violent brain cells seem to evolve amongst poor unemployed hopeless wage slaves and not amongst the rich people, both black and white, in Beverly Hills, Greenwich Village or Knightsbridge. 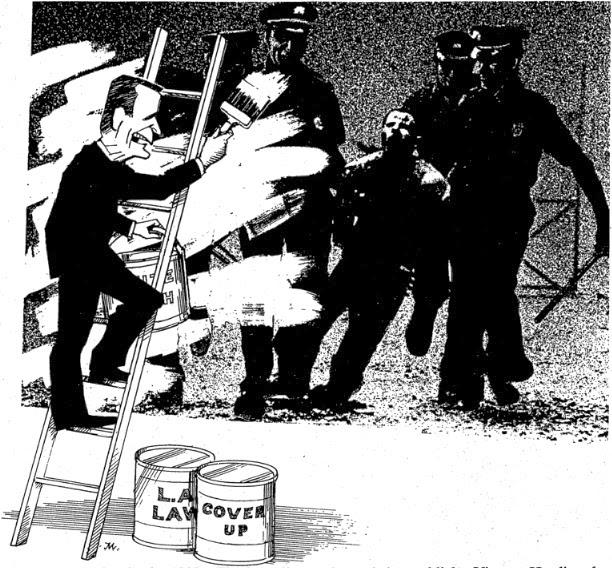 The long-held racist ideology of the USA is a reflexion of the fact that chattel slavery ended in the 1860s but that wage slavery persists in the 1990s. The brutality of the plantation owner has given way to the profit-grabbing claim to inherent superiority by the capitalist owners and controllers of the means of wealth production and distribution. Capitalism does not have inequality and divisiveness as an accidental and eradicable feature. Inequality and division are endemic to all class societies.

Some black political activists have seen the division in American society in terms of race or skin colour rather than class and in doing so they are avoiding the root cause. As early as 1865 a black convention in Charleston formulated an “Address to the White Inhabitants of the State of South Carolina” which called for an elusive equality amongst all men:

“We simply ask that we shall be recognised as men; that there be no obstruction placed in our way; that the same laws which govern white men shall govern black men; that we have the right of trial by jury of our peers; that schools be established for the education of coloured children as well as white; and that the advantages of both colours shall, in this respect, be equal; that no impediment be put in the way of our acquiring homesteads for ourselves and our people; that, in short, we shall be dealt with as others are—in equity and justice.”

This statement assumes that there is one human race rather than that society is divided into antagonistic interests on the basis of property possession. In 1965 the Watts riots in Los Angeles shattered the self-deception of American ideologists who thought that they lived in a land of equality where the wretchedly impoverished would never embarrass them by resisting publicly. Vincent Harding describes the Watts riots:

“For five days fighting went on; blacks attacked police, firemen, white stores—but no white civilians. The flames from dozens of fires lighted the night-time sky; bullets, tear gas shells, screaming sirens, shouting of men and women poured out a cascade of sounds closely approximating those of battlefields and it was. When police and 13,000 national guardsmen finally quelled the uprising 34 persons were dead, more than 1000 wounded and nearly $40 million of property had been destroyed.”  (The Other American Revolution).

The then President, Lyndon B. Johnson, responded to the display of working class indignation by making pious reformist noises about The Great Society which would be created out of so-called equal rights legislation. The exhibition of police and court racism in LA is proof that the Great Society was a fiction utterly unrealisable within a system which creates economic waste and an environment unfit for human habitation.

The Bush government will not learn from the LA riots nor can it learn except how to contain its subjects more successfully. The rioters will have gained little from the riots but for some looted cheap goods and a sense of being noticed. And the results of the riots are more working class wounds; the enmity of wage slaves against wage slaves, many left dead. Workers will get nowhere fighting each other and calling for capitalist justice. What we must do is unite anger with understanding and turn these upon the real enemy: those who rob us of the fruits of our labour.