News of the death of A. W. L. (Tony) Turner in a Cape Town hospital in February at the age of 83 will awaken memories in many older readers. He joined the Party in 1931 and resigned in 1955 after a series of acrimonious disputes.

Tony was accused of an anarchism that was incompatible with Marx. He had taken up a completely pacifist view together with Tolstoyan ideas about the socialist future—small-scale, a vastly simple society, that anticipated subsequent thinking amongst people like Ivan Illich, Fritz Schumacher and Edward Goldsmith.

Many members felt the difference should have been containable in a party seeking world revolution. If market society was replaced with production for need it was inconceivable that the result would take the same form everywhere.

Tony Turner began life before World War I in the slums of Walworth, the child of an Irish-cockney woman and a Maori father whom he never saw. He enlisted in the Navy as a boy sailor and saw service in the Far East. He took up boxing because, he told me, he was being constantly teased for persistent bedwetting, an affliction which eventually got him discharged from the Service, Before this happened he won the Combined Services Championship in one of the light divisions. 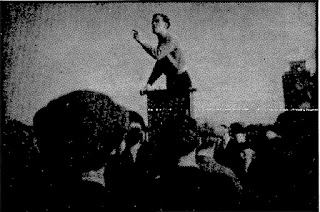 He returned to Walworth in time for the Slump. With other unemployed men in a similar position he developed stratagems of survival, including taking the long view by joining the Party. The Walworth—Elephant & Castle contingent in the Party formed an axis with Jewish lads from Bethnal Green and the whole lot must have looked as if they had looted a theatrical costumiers. These were the days of reach-me-downs. This was none of your middle-class shopping for accessories in Oxfam. Turner, according to contemporaries, sported patent leather dancing pumps and a Magyar blouse.

When this band of Bisto kids didn’t have money for a cup of tea at the caff they hung around the Public Library which was warm and dry. Many became bookish and took elocution lessons. They went and sat in the gods at the Old Vic when they could raise four pence or knew the doorman, and used their leisure like gentlemen, learning dancing, fencing, chess, bridge—anything that was free to the unemployed, and taught each other poker and other disreputable activities.

During his time in the Party Turner was a remarkably active and successful advocate of the SPGB point of view, so much so that the Party was sometimes referred to as Tony Turner’s Party, to the irritation of older, less ebullient members. For people who heard him on the platform in Hyde Park or debating public figures in the years during and after the war, his performances were hypnotising in the first arena and devastating in the second—as many politicians found to their cost and chagrin.

He appeared at the Fulham Conscientious Objectors Tribunal during conscription as an amicus curiae to plead the case of many members before Justice Hargreaves. The Judge very early on became satisfied simply with an assurance from Tony that the person was a bona fide member for their exemption to be granted. The Services didn’t really want socialists upsetting the rest of the lads.

He joined the Hampstead Labour Party after leaving the SPGB but left after three weeks. He emigrated to Kenya where he built up a substantial book business but continued to visit Britain frequently. In recent years he renewed acquaintance with the Party, visiting branches and taking part in discussions. He clearly enjoyed the greater spirit of tolerance that he found.