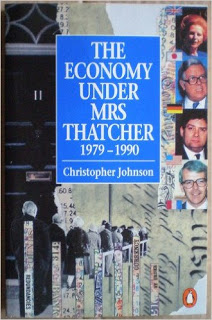 This is a generally readable account of the economic policies pursued by the Conservative governments under Mrs Thatcher, containing a useful appendix of statistics on everything from trends in economic growth to changing employment patterns. Johnson, a specialist adviser to the House of Commons Treasury Select Committee, shows that even on Thatcher’s own dubious terms, her governments were a decidedly mixed bag—with notable failures to deal with unemployment, inflation and economic growth.

Though Thatcher is usually portrayed as a clear-sighted, no-nonsense politician, this book goes some way towards undermining the image by hinting at the very real confusion of her governments with regard to the conduct of economic policy. Though Johnson only touches the surface, there is a definite recognition that a core confusion of Thatcherite economic policy was on the subject closest to her heart—inflation.

Throughout the 1980s Conservative governments showed themselves to be hopelessly unclear about the cause of the persistent rise in the price level, and proved themselves incapable of halting the phenomenon to which they attached so much importance. Early intentions to slow the rate of growth of the money supply foundered on an inability to understand exactly what constitutes money, and from that point on government policy plumbed the depths of confusion. In the long-running farce since then, inflation has been blamed on a multitude of factors ranging from high wage rises to low interest rates, excessive government expenditure to incorrect tax policy and beyond. Everything, that is, except its real cause—the policy pursued by all governments alike since the Second World War, of printing an excess issue of inconvertible paper currency in an attempt to secure a buoyant economy.

While the stubborn rises in the price level continued to bewilder Tory politicians, the policy aims of economic growth and low unemployment also provoked confusion among the ranks of Thatcher’s ministers and advisers. All her governments were marked by a tension between those who thought so-called “monetarist” policies on state expenditure and trade union reform could pave the way to truly lasting economic growth, and others, who, in their more realistic moments, took a rather different view. This realistic perspective, forced on the Conservatives by events, was summed up by former chancellor Nigel Lawson in 1990, who told the House of Commons that “there always have been economic cycles and there always will be economic cycles”.

We might add to this remark that there will always be economic cycles so long as capitalism lasts, and that only socialism can put an end to them. Similarly, only social ownership of the means of living with production solely for use can provide the framework for the abolition of poverty, homelessness, crime and those other afflictions of capitalist society that flourished under the now rusted-up Iron Lady, none of which her economic policies proved capable of solving.