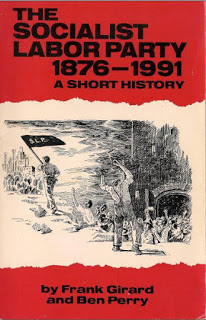 In our August issue we referred to the SLP of America as “our political cousins”. This was a reference to the common historical origin of us and the SLP in the “impossibilist” (i.e, anti-reform-programme) wing of pre-WWI Social Democracy. It was not meant to suggest that we had some political affiliation with them. In fact, of course, we are opposed to them as we are to all other political parties.

The SLP, for those who don’t know, is a party founded in America in 1878 and whose outstanding figure was Daniel De Leon who edited their paper from 1891 till his death in 1914. Until 1976 it used to contest the US presidential elections every four years, polling around 40,000 votes. Its main plank is “socialist industrial unionism” which advocates that, to establish socialism, workers should organise into industrial unions to take and hold the means of production and then to administer future society.

The SLP has a detailed blueprint for future society involving the substitution of what they call “industrial government” for the political state (people are to vote at their places of work rather than where they live as at present) and the substitution of labour-time vouchers for money, and which is seen as being able to exist in just one country. We have seen this as pre-empting the democratic decision of those who will set up and live in socialist society. Clearly there will be democratic control in the workplaces in socialism, but there is no reason why the whole decision-making and administrative processes should be based on industrial constituencies and we have never favoured labour-time vouchers even to deal with any temporary problems of supply that might exist in the very early days of socialism. We also say that socialism must be worldwide, because capitalism already is.

Although they never regarded the Bolshevik coup of 1917 as a socialist revolution nor Russia as socialist, right up until the Russian invasion of Finland in 1939 the SLP did consider Russia to be some sort of “proletarian” regime and even today are reluctant to refer to it during this period as “state capitalism”. They took the view that Russia was not ripe for socialism and had first to be industrialised and saw the Bolsheviks as doing this in some “non-capitalist” way (a position similar to that of some Trotskyist groups).

This short history of the SLP by two of its ex-members brings out another difference which is not apparent from a comparison of their policies and analyses and ours: the SLP’s undemocratic internal structure. Girard and Perry describe how the National Secretary and the NEC have the power to expel any member and how this has been widely used over the years. This contrasts with the position in the SPGB where a vote of the entire membership is required before anyone can be expelled.

In covering the period after De Leon’s death in 1914 this booklet is a useful complement to Stephen Coleman’s 1990 biography of Daniel De Leon in the Manchester University Press’s “Lives of the Left” series.