Book Reviews: ‘The Ideology of the Text’ and ‘Yours For The Revolution’

‘The Ideology of the Text’, by Christopher Hampton (Open University Press. £8.99)

‘Yours For The Revolution’, edited by John Graham (University of Nebraska Press) 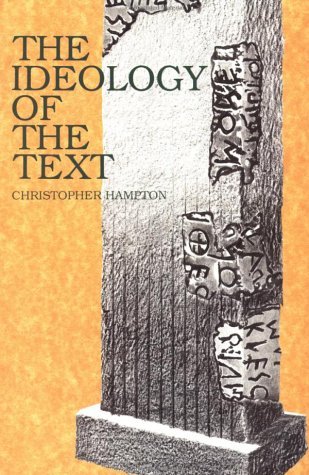 Engels once commented that he learned more about history by reading the novels of Balzac than the historians ever told him. Literature is part of history; it reflects and contributes to its struggles, even if that is not the writer’s intention. In ‘The Ideology of the Text’ Christopher Hampton launches a timely assault upon those who seek to explain literature purely in terms of the words contained within texts, as if these can be extricated from historical motion and converted into “pure” literary form. Hampton exposes such theories as being:

“in essence a refutation of the Marxist position, which takes its stand on the assumption that there are pre-existent material conditions which we can identify and relate to. and which determine the ways in which we act and think and feel.”

The “mystificatory detachment” of the post-modernist critics is seen by Hampton as an excuse by which critics opt out of the necessity of explaining the texts of literature in terms of their ideological status—the sense in which they express the class consciousness either of the oppressor or the oppressed.

He looks at a number of important writers (Shakespeare, Milton, Blake, Arnold, Morris) and attempts to treat the crucial question of how to decide their ideological colour. Shakespeare, for example, is seen as so much a part of the established English cultural institutions that quite absurd readings of his plays have emerged; Hampton cites G. Wilson Knight’s use of Cranmer’s speech at the end of Henry VIII as justification for his support of the Falklands War. A remarkably good historical contextualisation of Shakespeare’s writings is offered, a reading of which alone justifies the purchase or loan of this book.

Again, the treatment of the poetry of William Blake is fought for against those who would confine such texts to the history of harmless Christian prophecies. Blake, it is argued, made the historically crucial and ideologically distinctive choice to reject the pessimism of so many other poets—many of whom justified their right to call themselves poets by their unceasing miserableness. In the case of Blake, writes Hampton.

“Though his world did its best, callously and indifferently. to break him, it failed. He was not a pessimist. He saw the world as it was, but he was not content to accept it as it was; for he saw it as it could be.”

Substantiation of this assertion is abundantly provided. More than most, a writer who saw the world as it could become was the revolutionary socialist, William Morris. Hampton concludes that:

“Today, the kinds of questions Morris asked about the destructive conditions of his time have not lost their urgency. However changed the particular circumstances that govern our lives in the late twentieth century, we still live under the domination of a capitalist economy which functions by feeding off the common wealth of the people and by imposing restrictive and stunting conditions upon them.”

It is a cause for celebration that a writer of Hampton’s ability is throwing his weight behind the cause of clear Marxian analysis, and that, in the spirit of Marx, his book serves not merely to explain literature but to use it as a springboard to political action. 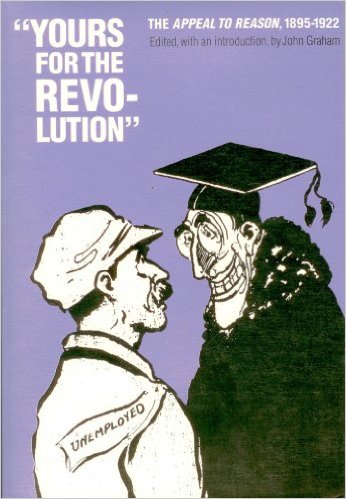 Too many people who think of themselves as “Writers” and “Authors” place themselves in the precious literary arena where they feel they must be insulated from the filth of political ideas. As Hampton says, this luxury is not available to writers: those who are not with us are for them. John Graham has edited an excellent anthology of writings by those who were not afraid to contaminate their pens with the stains of class struggle. ‘Yours For The Revolution’ is about ‘The Appeal to Reason’, a newspaper which was published in Kansas between 1895 and 1922. Graham offers an interesting historical introduction to the newspaper, although he over-emphasises the journal’s socialist claims. In effect, it was a mish-mash of mainly reformist alongside some highly revolutionary writings. Upton Sinclair’s The Jungle was first serialised in The Appeal To Reason and Debs was a frequent contributor. Compared to the more solidly Marxian writings of De Leon, the pieces by Debs are rather tame, although the equal of anyone in terms of fiery rhetoric. The anthology contains some truly moving pieces; from Helen Keller, Mother Jones, Jack London as well as the individualistic editor, J. A. Wayland.

There is one letter which particularly moved the present writer: from a worker who was poor and ill and resolved to end his life and send what remained of his money to the journal that he had spent years trying to sell to workers. In “His Last Letter’ (as the piece was entitled) the anonymous writer urges readers. “I pray and beg of you to be of good cheer and courage. Do not fear to own the cause or blush to speak the name. If you can’t talk (nearly all persons can if they will try) you can do a world of good by distributing literature. Don’t let’ em rest until such barbarous customs are completely abolished . . . Our principles cannot be refuted, for Right is on our side and we are bound to succeed . . .” Of course, the movement which he died supporting did not succeed, and only on the basis of revolutionary consciousness could success come. Those interested in the all-too-frequently neglected history of the American working-class movement should read this anthology.

Far from succeeding, in many ways there have been years of awful failure following the days of the Wobblies and The Appeal to Reason. In the USA the trade union movement has fallen prey to the organised bandits who have used it for their own corrupt purposes. Dan La Botz’s Rank and File Rebellion (Verso) tells the story, which has been ignored by the British media, of the Teamsters for a Democratic Union and their efforts to wrest control of their union from bureaucratic leaders of the Jimmy Hoffa variety. The book makes compelling reading. If you did not think that there were militantly-minded wage slaves in the USA, then this book will open your eyes. The modern Teamsters’ movement understands the importance of democracy to working-class organisation and that is a vital lesson (not to understand only in theory, but in practical activity). They could do worse than to turn to Yours For The Revolution to learn that, as well as democracy, the workers need to be organised to a purpose: the abolition of the wages system.