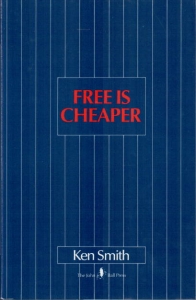 Books which present a lively and contentious critique of capitalism and advocate socialism are unfortunately rare. But here is such a one — a book to learn from and be enthused by, a source of information and argument for all socialists.

Ken Smith usually refers to capitalism as the Market Economy. His book opens by putting the blame for economic and social malaise on the market system, which introduced scarcity and poverty in place of the plenty and comfort of previous social arrangements (a point we take up below). In Britain, he claims, so much effort is expended on buying, selling and policing that only one in ten of the working population is actually producing wealth. This is interesting in that it is a far lower figure than socialists commonly cite for the proportion of workers doing useful work, which is usually reckoned as around one half. I suspect that both figures are really the result of intelligent guesswork, though the important point is of course not at issue.

Most of the book is devoted to exposing the effects of the market economy on various “industries”, from food to shelter and disease and crime. The author claims, for instance, that dental caries is an entirely artificial disease, caused by defective diets and unknown among “primitive” peoples. The absurd priorities engendered by the profit system are illustrated by the fact that more people work in house financing than in house building. While the numbers of homeless increases, the quality of new homes deteriorates, with obsolescence being built-in like the wardrobes. Clothes, too, are deliberately made shoddily so as to encourage increased purchasing and fashion-following. The money industry, which produces nothing of any use whatever, is one of the most profitable of all. All the chapters in this section are full of good material.

The final part of the book proposes that all goods and services are provided free. It is pointed out that many are already provided free to those who want them – police and blood, for instance. People already do lots of things for each other, for friends and neighbours, without expecting any monetary reward, so nobody can argue that such a way of proceeding is impossible or against human nature. A system where people control their own lives is needed to replace the market economy. But people can only free themselves — they cannot be forced to co-operate voluntarily. The need to capture political power is stressed, but, although there are references to the world-wide nature of capitalism, there is no mention that socialism will also need to be a world society. Indeed, an unfortunate reference to “the return of the land of Britain to the people of Britain” suggests a rather insular outlook. But of course a nationally-based socialism is impossible.

Mention was made earlier of the claim that in pre-capitalist systems, ordinary people were comfortably off and there was a potential for plenty. On this account, the development of capitalism was a gigantic historical “mistake” which impoverished people, rather than creating the possibility of abundance which socialism will finally realise. Some evidence is adduced in support of this view, but it really does seem terribly one-sided. For one thing, it ignores the non-material aspects, the ignorance and superstition of feudal times, which capitalism has fundamentally overturned. The cosy image of peasants contentedly tilling their own land has to be viewed against the backdrop of enormous disparities of wealth and power, the privileges enjoyed by the rulers of church and state. To the extent that feudal agriculture was able to support the population, this was largely due to the very low population density. It is hard to see merit in implied claims that socialism was possible on the basis of the pre-market situation.

If one wants to make a case that capitalism has been less progressive and “beneficial” than often assured, the best perspective to adopt is to consider its global impact:

“It is . . . by no means self-evident that there is more liberty, equality and fraternity in the world today than there was one thousand years ago. One might arguably suggest that the opposite is true. The overwhelming proportion of the world’s work-forces, who live in rural zones or move between them and urban slums, are worse off than their ancestors five hundred years ago, They eat less well, and certainly have a less balanced diet . . . They unquestionably work harder — more hours per day, per year, per lifetime. And since they do this for less total reward, the rate of exploitation has escalated very sharply.” (Immanuel Wallerstein: Historical Capitalism)

But these criticisms are fairly minor, and do not detract from the book’s worth. Despite the range of sources cited, it is not a dry-as-dust academic work, but a vigorous and always readable polemic. Let us hope it is read as widely as possible and so helps to increase the number of socialists.