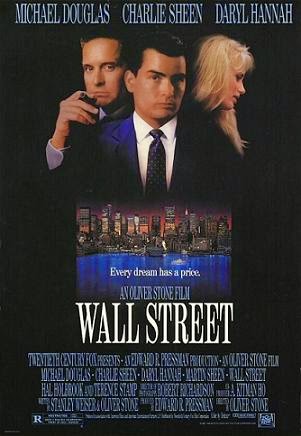 For once a film that has been a box office success is worth going to see. Wall Street is a thoroughly believable portrait of the world of the New York stock market. It has excellent acting performances by Michael Douglas as the ruthless corrupt tycoon Gordon Gecko and by Charlie Sheen as Gecko’s young conscience-ridden apprentice. Both have slick but convincing dialogue to deliver and scenes which, while having loads of technical detail about financial dealings that go right over your head, are so tightly held together as to keep you riveted for the whole two hours.

The film has social messages too. And what better way to deliver them than to make them part of a powerful human drama? The director, Oliver Stone, has already shown his moral and political concerns with films like Salvador and the recent one about the Vietnam war, Platoon. Wall Street, it has been said, is a condemnation of the capitalist ethic, of the institutionalised greed the market system represents. In one key scene in the film, Gecko addresses a hall full of shareholders and, making no apology for his ruthless dealings, says of the market:

“Greed is right. Greed is good. Greed clarifies.” Of course, coming from the mouth of an absolute stinker, this is a speech whose message to the filmgoer can only be the reverse of what was intended.

But does the filmgoer actually leave the cinema thinking the market is bad? Well, yes and no. In the end the apprentice escapes the clutches of his sorcerer and helps deliver him to justice. But the justice he delivers him is a law that classifies as illegal some of the dealings Gecko has been involved in, so-called “insider dealings”. So, from this point of view, profit-making through the market is seen as fine as long as it takes place within the rules laid down by the profit-making system. Yet, at the same time, in its representation of the way in which the millions of people who run society are powerless pawns of the market and can see their livelihoods and futures upset by it at any time, Wall Street will set many people thinking that there must surely be a better, saner way of organising the way we live and produce. The film itself doesn’t go so far as to suggest one, but then if it had it would probably have been more didactic, less watchable, and no doubt less of a box-office success.