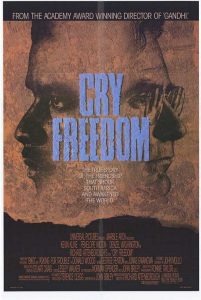 Richard Attenborough’s film, Cry Freedom, tells the true story of white newspaper editor Donald Woods (played by Kevin Kline) who was forced to flee South Africa as a result of his championing of Steve Biko, the black consciousness leader who was brutally killed in police custody. It takes as its central theme the apparent dilemma of a white liberal committed to ending apartheid but who, at the same time, benefits from it to the extent that he and his family live in the kind of luxury (complete with black maid) available for the most part only to whites.

Woods is challenged to go and meet Biko after his paper publishes a story accusing him of being a “black racist”. He revises his opinion and the two become friends. However, his political education is less about the realities of apartheid shown to him by Biko, than about the realities of state power that the Minister for Police, Kruger, teaches him. His liberal perspective on the state, while it allows that there is sometimes corruption, “over-zealousness” and individual acts of brutality on the part of the police, does not permit him to see that the idea of “the rule of the law” is little more than a facade; that in fact the state operates in the interests of those with power and will take whatever steps are deemed necessary in their defence.

The high point of the film comes when Woods is forced to question that liberal viewpoint. He realises that his complaint about police thugs smashing up a craft workshop run by Biko has simply resulted in him being dubbed a subversive, banned and ultimately harassed by the police to such an extent that he is forced to leave South Africa for good. That realisation is confirmed when Biko — like numerous other black prisoners — is murdered while in police custody.

Cry Freedom is a glossy, at times sentimental, film which towards the end degenerates into little more than an exciting “escape” story as Woods and his family make their getaway. It’s a pity that, no doubt to secure the film a broader audience, its politics ultimately take second place to the sentiment, the gloss and the excitement.