Book Review: ‘The German Greens – A Social and Political Profile’

‘The German Greens: A Social and Political Profile’, by Werner Hülsberg, Verso. £9.95 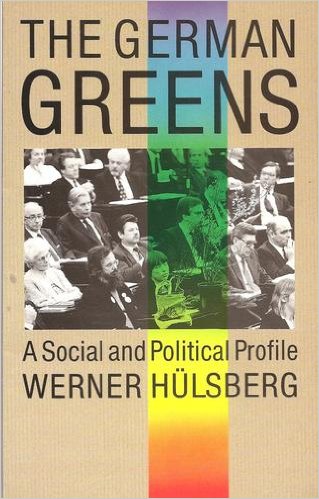 For anyone who has been following the press reports about the on-going debate in the German Green Party between the realos and the fundis, this book will fill in the background. Writing as a Trotskyite infiltrator into the Greens (yes, super-opportunists that they are, they get into any movement of size and influence). Hülsberg begins by describing the social and political conditions in West Germany since the war from which the Greens emerged as a political party at national level as recently, it should be recalled, as 1980.

His basic thesis is that Greens are a left wing party that came into being within the framework of the West German electoral system (which allocates seats to any party obtaining at least five per cent of the vote) to occupy the political terrain left vacant by the Social Democratic Party (SPD) when they abandoned even their nominal opposition to capitalism at their conference in Bad Godesberg in 1959. This was the conference at which they called “the social market economy”, i.e. a market economy plus social reforms, which is the model that Kinnock and Hattersley now want the Labour Party to follow.

Hülsberg is able to produce hard facts to back up this argument. Firstly the Greens’ programme shows that it is not a mere single-issue ecology party: the Greens are anti-NATO and pro so-called liberation movements in the Third World; they support feminism (at one time their three parliamentary leaders were all women). Secondly, Hülsberg produces evidence from studies of voting patterns which show that 80 per cent of Green voters used to vote SPD (while most of the rest are new, first-time voters) and that many voters use the two votes they have under the West German electoral system to vote for both the SPD (individual candidate vote) and the Greens (party vote) This means, as Hülsberg rightly points out, that Green local councillors and regional and national MPs are in a very real sense prisoners of their electors who clearly favour a SPD-Green coalition.

This is where the realos, or realists, come in. They are those who favour working with the SPD in government at local and regional and. if the occasion arises, even at national level, to try to achieve realisable reforms. This, in December 1985. one of their more prominent representatives. Joschka Fisher, became Minister for the Environment in the Hesse (Frankfurt are) State government. The fundis, or fundamentalists, are those who argue that the Greens should not take part in government but should campaign, against the Social Democrats and conservative Christian Democrats equally, for their long-term goal of a democratic, ecological society. One of their more prominent representatives was Rudolf Bahro who left the party in 1985. ostensibly because it agreed not to oppose vivisection under some circumstances (for medical research), but in reality because he had become a quasi-religious mystic preaching moral regeneration.

Some of the arguments between the realos and the fundis have been pretty vicious and the press are always speculating about a forthcoming split in the Greens. This has never materialised and probably won’t since both wings have an interest in sticking together to stay above the five per cent vote level that enables them to be represented in elected bodies at local, regional and national level

Hülsberg identifies two other currents within the German Greens, which he calls, respectively, “ecolibertarians” and “ecosocialists”. The first are those who favour a withdrawal from industrial society and concentration on building up an alternative network of cooperatives, health food shops and communes. The second current (with which Hülsberg identifies himself) consists of ex-Maoists. Trotskyists and others who favour the Greens orientating their activity towards the trade unions and the traditional, manual working class. Ironically. for all their talk of revolution and anti-capitalism, in the internal debate over tactics they line up with the reformist realos against the fundis. This is because they see the SPD as “the party of the working class” to be supported, as Lenin put it and as Hülsberg repeats, in the same way that the rope supports the hanged man.

Hülsberg argues that, at national level, the Greens’ tactics, in the event of a SPD-Green parliamentary majority, should be critical support for a minority SPD government. In this way – according to him – workers will soon “learn from experience” that the SPD are no good and turn to the Greens . . .  in which the Trotskyite vanguard will be well entrenched. No wonder many German Greens have doubts about the sincerity of the so-called “ecosocialists”. And they are right, since it is clear that they are neither ecologists nor socialists.

There is. however, no real possibility of the Leninists taking over the Greens since, whatever else can be said about them, the German Greens are organised on a far more democratic basis than other parties, practising time-limits on periods of office and rotation of posts which make it virtually impossible for them to be taken over by an unrepresentative minority. This might stop them becoming Green Leninists but it doesn’t stop them being, in a description many of them wouldn’t reject, Green reformists.