Book Review: ‘Inside Left – The Story So Far’ 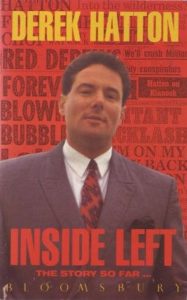 Any reader expecting to find incisive, political analysis within the 174 pages of this book will be disappointed. Anyone looking for an unbiased factual record of the events in Liverpool during the period when a majority Labour council was controlled by the Militant Tendency should seek elsewhere. Early in the book Derek Hatton tells how he almost became an actor. It is the misfortune of the working class of Liverpool that Hatton did not take up that profession, but became instead a member of a politically dishonest group of opportunists, the Revolutionary Socialist League, also known as Militant Tendency. Hatton himself displays all the traits of the professional politician – selective memory of past events and a constant desire to be shown in the best possible light. What this book chronicles is the rise of an arrogant, ruthless, self-interested careerist. For all Hatton’s rhetoric about class interests, on the evidence presented here one can only come to the conclusion that Hatton would have done very well in the present Conservative Party.

Hatton purports to show how a gallant group of “socialists” engaged in a fight against capitalism, were defeated by the actions of reactionary servants of the ruling class – the Government and the Labour Party. In fact the book actually shows up the hypocrisy of those who seek to impose “socialism” from above. The political philosophy described by Hatton bears as much resemblance to socialism as Barbara Cartland does to literature.

“When the history books are written for the 1980s the names of Militant and Derek Hatton will be right there, alongside those of Kinnock and Thatcher”, Hatton writes. When the working class finally achieves emancipation from the domination of capitalist class then Hatton, Militant et al. will be consigned to the dustbin of history where they belong.