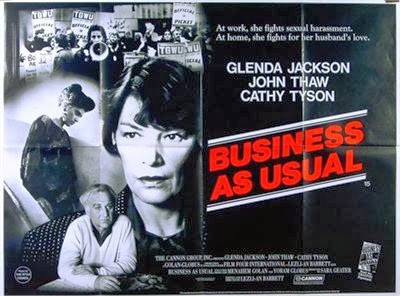 Hundreds of women experience sexual harassment at work. Many do little or nothing about it since the harasser is frequently their boss – to complain could lead to dismissal. And, until recently, many trade unions have failed to take the issue seriously.

Business as Usual is based on the true story of one woman worker who did complain about the harassment by their boss of a fellow worker and got sacked as a result. The film focuses on her struggle to get her job back. The woman at the centre of the story, played convincingly by Glenda Jackson, is inexperienced in industrial disputes and is only too happy for her campaign to be taken over by the unemployed section of the TGWU in which her son and his girlfriend—members of the Militant Tendency—are heavily involved, especially in view of the half-hearted support given by the union’s full-time officials. As well as coping with this struggle, she is also trying to deal with the domestic consequences of her husband’s (himself a former trade union official) redundancy and his affair with an oh-so-sincere television reporter.

Ultimately, the film as a whole, despite what is basically a good story, fails to convince because it tries to do too much. It takes on not only sexual harassment but also racism, police brutality, unemployment, sex-role reversal and trade union conservatism. Furthermore the “baddies” in the film—the harasser and the owner of the company—are unconvincing caricatures. I’m sure there are people who are that slimy but it would have been far better if they were less like the twentieth century equivalent of the cartoon capitalist in top hat of the nineteenth century.

The most true-to-life part of the film—apart from the sexual harassment—was the depiction of Militant Tendency activists taking over the fight for Babs’ reinstatement. The film was much too generous to them, however, failing to show the true extent of their political opportunism. However that willingness to clamber aboard any bandwagon they can for their own ends was demonstrated admirably by the twenty or so Tendency members who waited outside the cinema to greet the crowd as they emerged with copies of Militant for sale. An example of life imitating art, perhaps?