Edward Upward is the pseudonym of Allan Chalmers**. (This is incorrect. See Note below). He was born in Romford in 1903, educated at Repton School and Corpus Christi College, Cambridge where he obtained a degree in history and English. After a life-time of public school teaching Upward retired to the Isle of Wight, where he still lives.

Upward occupies a minor, but interesting, place in British literature; although his literary career has spanned almost fifty years his output is small, consisting of just six novels. His early writing, however, (was) augmented by contributions to New Country, New Writing and Left Review. 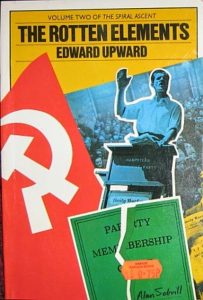 Upward belonged to the group of literary intellectuals who were attracted to the British Communist Party in the 1930s. The group included the poets W. H. Auden, Cecil Day Lewis, Stephen Spender, Louis MacNeice and the novelist Christopher Isherwood, a close friend of Upward’s at Cambridge. Upward influenced Auden, Spender and Isherwood, in their early years as writers, particularly during their flirtation with Communism. He wrote the trilogy The Spiral Ascent which, for all its faults, provides a remarkable document of Communist Party membership in the 1930s and 1940s. Unlike the “fellow-travellers” Auden and Isherwood, who defected to America, and Spender who accepted a knighthood, Upward has clung, almost tenaciously, to the Leninist dogma of his youth. And in 1986, at the age of 83 he produced a book of short stories, The Night Walk with the same heavy-handed dogmatism which marred his early works.

The Spiral Ascent consists of In the Thirties (1962), The Rotten Elements (1969) and No Home But the Struggle (1977) which traces the career of Alan Sebrill, a public schoolmaster, who joins the Communist Party in the 1930s and remains a member for sixteen years, finally resigning because of the revisionist policy of the British Communist Party. Sebrill retires to the Isle of Wight and involvement with CND movement in the final book.

Sebrill’s arguments with Aldershaw, another schoolmaster, provides an interesting insight into Communist Party members’ ideas. Aldershaw asserts that Marx’s conviction that advanced capitalism would provide the conditions for socialism to replace it was mistaken because the Russian revolution took place in an economically backward country. In reply Sebrill makes the same mistake in failing to appreciate that the Russian revolution was a coup d’etat which replaced serfdom with state capitalism and states that capitalism had to be broken at its weakest point. When Aldershaw says: “Tyranny has often been violently overthrown, but it has never yet developed gradually into liberty. Dictatorship of whatever kind is an absolute evil.” Sebrill replies: ” . . . I don’t agree that all dictatorships are equally bad. It depends upon what or whom they are directed against.”

When Sebrill applies for membership of the Communist Party he is asked why he wants to join. He wants to say that “the independence of the middle class was being increasingly undermined and would soon cease to exist and that the only hope for members of his class was to go over to the side of the workers against the monopoly capitalists”. However, he feels that this sounds too abstract and talks about the dishonesty which he, as a teacher, is compelled to practice to keep his job.

Thus, Upward portrays his misconception of class. Sebrill’s “middle class” ideas are considered too abstract for the workers in the branch yet the fact that he has to be dishonest to hold on to a job that he cannot afford to lose demonstrates his working class status.

In the second volume we find Sebrill married to Elsie, another Party member. A considerable portion of the book is devoted to their struggle to accommodate the frequently changing policies of the Communist Party in the late 1940s. Clearly, they are dismayed by the Party’s support for conscription and its enthusiasm for nationalisation. After agonising over the theoretical correctness of Party policy and trying to justify the somersaults of the Party line they conclude: “Perhaps there’s nothing wrong with the Party’s policy at all.” Eventually, after being accused of “international factionalism” by the Party hierarchy and further disenchantment with the Party’s revisionist line they resign.

Upward’s confusion over class interest; his complete misunderstanding of the way that Lenin’s state capitalist views opposed Marx’s ideas of a democratic, moneyless society makes it doubtful if he has any understanding of socialism at all. Like Upward, socialists wish to end capitalism but this will not be achieved by a dictatorial vanguard suppressing political opponents, undercover workers or leaders, but by workers understanding, wanting and working for socialism.

Old age has not dimmed Upward’s vision as The Night Walk clearly shows. At times his attempts at self-vindication are uncomfortably strained, but occasionally a story provides a glimpse of his ability. In The Procession a painter watches his own funeral: the death of the painter he could have been, and The Poet Who Died expresses grief for an old friend who abandoned poetry for politics. In both of these stories Upward could, perhaps unwittingly, have been writing about himself.

Literary lefties in the 1930s

** Note: ‘Allen Chalmers’ was not Upward’s real name. He wasn’t published under a pseudonym.