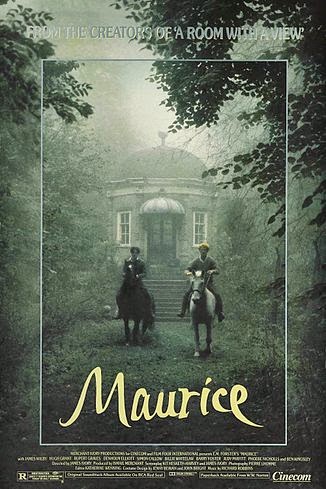 After the Merchant-Ivory production of A Room With A View comes a film adaptation of another E.M. Forster novel — Maurice. It is a love story of two privileged young men — Maurice (James Wilby) and Clive Durham (Hugh Grant) — who embark on a love affair at a time when homosexuality was regarded as both a moral failing (or even a disease) and a criminal offence.

However, the brutal effects of intolerance towards gays is, for the most part, implied rather than made explicit. Instead we see Maurice and Clive as undergraduates at Cambridge, in the luxurious surroundings of Durham’s country estate and condescending to play cricket with “the peasants” on the village green.

For Maurice, the hostility towards homosexuality is not sufficient to deter him from loving Durham. But for Durham — with his title, land and status to consider — the realisation of how much he stands to lose should his affair with Maurice be discovered, leads him to opt for the respectability of marriage to a suitable bride. Maurice, hurt by his lover’s rejection, is driven into the arms of Scudder (Rupert Graves), Durham’s game-keeper, to seek consolation.

The film is prettily shot — plenty of soft focus bucolic country scenes — and the story poignant, if at times rather unconvincing. Scudder is something of a romantic caricature of the untutored, but emotionally honest and sensual, country lad in contrast to his refined but inhibited social superiors. Ultimately, the film is unsatisfactory, glossing over the difficulties, not only of homosexual love in a society that finds any form of sexual expression hard to cope with but also of a relationship that crosses class lines. We are left with the message that “love conquers all” which is about as naive and sentimental as Maurice and Scudder appear to be.