Book Review: ‘The Rich Get Richer’ 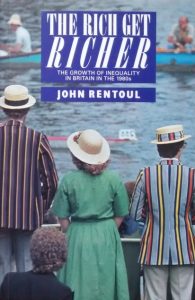 Who got the highest income from dividends in 1985/6? The answer is David Sainsbury, with over £13 million. And the table of the top ten dividend “earners” contains three other Sainsburys. That same year the highest so-called salary was paid to one William Brown of Walsham Brothers: £1,268,583. Lonrho boss Tiny Rowland had to get by on a salary of £392,285, though that was merely pocket money alongside his £8 million from dividends. The richest family in Britain is not, as you might think, Queen and Company, but probably one of the Grosvenors, Vesteys and (of course) Sainsburys, each of them worth over a billion pounds.

Such are among the figures and information provided by Rentoul, who gives a useful guide to the extent of inequality and to the background and life-styles of the parasitic super-rich. His main point, as the title implies, is that inequality has widened under the Conservative government, though any changes have surely been so small as not to affect the overall picture in any way.

In 1983, the richest 10 per cent of the population received 24 per cent of the total income, while at the same time 20 million people were living on or just above the degradation of the Supplementary Benefit level. With regard to wealth rather than income, the situation is rather different, with the top 10 per cent owning 53 per cent of all wealth. But the starkest contrast is seen by taking even smaller figures: the top one per cent own 21 per cent of total wealth, and an estimated 20,000 ultra-rich own four per cent.

Rentoul claims that there are not two nations nowadays, but three: the “haves”, the “have nots” and the “have lots”. He argues that (before Thatcher took over) there had been for 50 years or so a trend towards greater equality, with considerable proportions of wealth being transferred from the top one per cent of the population (who had three-fifths of personal wealth in the 1920s) to the remainder of the top half. The bottom half have stayed where they were, owning virtually nothing. He suggests at various points that the “haves” (or “middle class”) have many shared interests with the “have lots” rather than the “have nots”.

But the overwhelming majority of these “haves” are members of the working class who, like all workers, rely on the sale of their labour power to live and who would be able to survive for only the shortest of periods without working for wages. The altered distribution of wealth does not mean that the members of the capitalist class (those who live off dividends and so on) have become less rich in absolute terms – far from it; it simply reflects the growth of “home ownership”. But “owning” a house does not take you out of the working class. Nor is there any significance in the fact that a larger proportion of the population than ever before own shares. Most people’s shareholdings are tiny and the top one per cent of the population own three-quarters of all privately-held shares.

We need not dwell on Rentoul’s reformist ideas for eliminating poverty, which leave untouched the class monopoly of the means of production. But his book contains useful information to counter the ideas of anyone who believes that the idle rich don’t really exist.