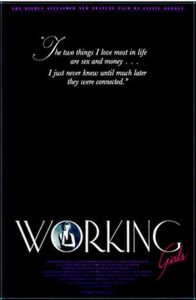 It is difficult to see what Lizzie Borden was trying to achieve with her film, Working Girls, about a day in the life of a prostitute. There was no story or plot as such and little attempt to make the characters anything more than two-dimensional. Was it then intended to carry some kind of message or social comment? If so, it is difficult to see what that message is.

The central character in the film supplements her income by working the occasional shift as a prostitute. However this is not a story of the sordid, often violent life of those women who ply their trade on the streets. The women in this film sit in a comfortably furnished apartment, make appointments with their clients by telephone and then wait for them to arrive. When they do so they are given a drink prior to being ushered upstairs to a bedroom. As the film progresses we are offered glimpses of a number of “girls” and clients all of whom display a range of neuroses, hang-ups (sexual and other) and inadequacies. The sex itself is depicted as sanitised – endless clean sheets, towels, tissues and the ubiquitous condoms – but is nevertheless explicit enough for some people to want to see the film for that reason alone (although one suspects that the peddling of soft-porn was not Borden’s intention). The girls’ working environment is clean, pleasant and relatively safe. They are not forced to do anything they really object to and threatening clients are removed.

The fly in the ointment as far as the girls are concerned is the brothel-keeper who only just manages to conceal a hard-nosed approach to her business behind a sugary-sweet facade. But despite the boss, this film suggests that prostitution is not a bad way to earn a living as exploitation goes. I don’t know how many prostitutes work in these kinds of conditions, but I would imagine that the majority have to endure the danger, potential violence and indignity of life on the streets. To that extent the film failed to convince me either that prostitution was any better or indeed any worse than other work.

The only really interesting moment in the film came towards the end when the central character quits the brothel because the “madam” has made her work an extra shift. As she informs the brothel-keeper that she won’t be back, she asks her if she has ever heard of surplus value. In a film that was totally unremarkable for its dialogue, this glimmer of insight comes as something of a shock – but the film ends at that point.