It’s very hard to make an anti-war film that successfully gets its message across. The temptation is to show all the horrors of war—the blood, brutality, boredom and battles. But films that glorify war do that as well.

Platoon, directed by Oliver Stone, was intended to 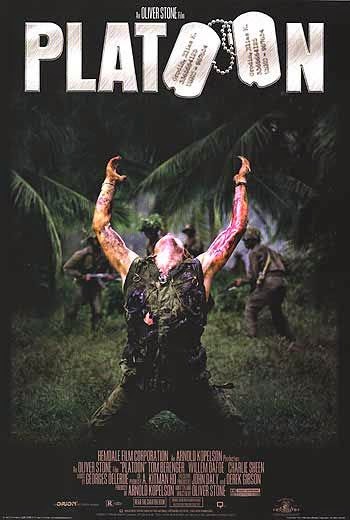 demonstrate the brutalising effects of the Vietnam war by following the career of a young soldier, Taylor, who has volunteered to fight after dropping out of college. Initially filled with fanciful notions of “fighting for his country” and “defending the free world”, he finally concludes that in reality “we are fighting ourselves”. This comment was supposed to be profound. At the most obvious level it was true. Much of the film focuses on the battle between two members of the platoon, both grotesque caricatures: Elias, the embodiment of good, who only kills “the gooks” in battle and doesn’t engage in any gratuitous extra-curricular brutality like his enemy, Barnes, embodiment of evil, who comes complete with grotesque facial scars. But at another level the remark was also true, although this was probably not what the director had in mind when he put the words into Taylor’s mouth. Americans in Vietnam were “fighting against themselves” in the sense that they were fighting against members of their own class with whom they had no reason to be at war.

Taylor, who lets us into his inner conflict through the unlikely medium of letters to his grandmother, becomes more disillusioned as his ideas of heroism are replaced by the daily terror, discomfort and fatigue of army life in the steaming jungle on the Cambodian border. To cope with the constant fear of ambush, the raids on Vietnamese villages and the atrocities he, like many others, turns to smoking dope. In the end, inevitably perhaps, he is injured in a cataclysmic battle and is flown home, more or less physically intact but mentally scarred.

Whatever the director’s intentions the anti-war message got lost under the special effects of the battle scenes. For those who watch war films for the blood and gore, the excitement of the crackle of machine guns and the flash of bomb blasts, Platoon was probably as watchable as films like Rambo which glorify war. It would have been easy to have seen it and to have learnt nothing new about the war in Vietnam and to have missed its essential message. Nevertheless there were a number of interesting “points” made in passing—like the number of blacks who were sent to fight as compared to the number of whites, like how it tended to be the poorest Americans who made up the bulk of the US Army — people who were dumbfounded that Taylor could be so stupid as to give up a comfortable life in college to volunteer to fight.

On the other hand the film had almost nothing to say about why America was fighting or indeed who they were at war with. The Vietnamese were referred to only as “gooks” or the “NVA” or “VC”. The only time the film tries to make the point that the Vietnamese were human too is when Taylor prevents a young Vietnamese girl from being raped by his fellow Americans. Otherwise the Vietnamese are only shadowy and menacing forces setting traps and ambushes for the Americans.

All in all Platoon was a disappointing film. It is difficult to see why it has received so many plaudits from the critics, although not why it’s been such a hit at the box office in America. War films are popular. This one uses the same technique as any other to appeal to its audience. Many people will watch it and not see it as a protest about the brutalisation that war causes. When I went to see it many people in the audience laughed in the “wrong” places, like when the Americans enter a Vietnamese village to look for Viet Cong and one American soldier brutally murders a young Vietnamese villager for no apparent reason. After he has bludgeoned him to death with a rifle butt he says something like “Did you ever see a head come apart like that?” And the audience laughed.