This is a paperback edition of a work first published in hardback in 1984. The reviews which appeared then made the point that this work represented the most comprehensive treatment to date of the Chartist movement. On the whole this view has considerable 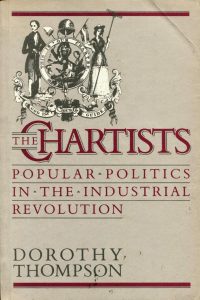 The book makes clear that working class participation in the Chartist movement was greater than many suppose. There were three main political strands in Chartism. Firstly, a small far-seeing revolutionary component. Secondly, reformist elements which, as capitalism developed, attached themselves to the coat-tails of the Liberal Party for most, if not all, of what remained of the 19th century. Thirdly, there was a strand that was really looking backwards to pre-capitalist days when in many ways people had more control over their lives than is permitted under capitalism. There was, for example, resistance to state control of education, with the object of retaining the informal system of earlier times whereby craft skills and other knowledge was passed from one generation to the next within a relatively small community.

Interesting details are given of the reaction of opponents of the Chartists. The following sentiments, expressed by Elliot Yorke, MP for Cambridgeshire, were no doubt felt by many:

“If gentlemen think there is nothing to be dreaded from our rural labourers, I fear they are greatly mistaken. I do not believe there is any village in my neighbourhood that would not be ready to assert by brute force their right (as they say) to eat fully the fruit arising from their own labour . . . Every parish in this neighbourhood is . . . ripe for any outbreak.” (p. 175)

Whereas nowadays all kinds of arguments are put forward to try to show that the workers do effectively receive the full fruit of their labours, and that the profit of capitalists is the reward for their own effort as well as ensuring future prosperity, the above statement is brutally frank. This MP seemed to accept that the worker is robbed but was determined, by “brute force” if necessary, to keep things that way. The propaganda with which we are familiar today — in which socialism is portrayed as an unworkable utopian pipedream — appears to be of somewhat later origin, appearing after the more brazen “you could but you mustn’t approach had ceased to be subtle enough.