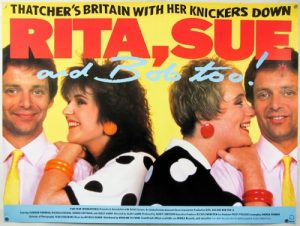 ‘Rita, Sue and Bob Too!’ generated considerable local interest in Bradford where I saw the film. It was, after all, written by local dramatist Andrea Dunbar and set in and around Bradford’s own Buttershaw estate. What I had expected was cinema vérité along the lines of Letter to Brezhnev – a witty, honest, warts-and-all look at working-class life in Kirkby. The two films do share some common features: both are concerned with two girls, loud-mouthed and looking for escape. In Letter to Brezhnev it was the kind of escape that comes when work ends and “life” begins; getting dressed up, night-clubbing and, ultimately, for one of them, “romance” with a Russian sailor and the irony of “escape” to a country that, according to western propaganda, most people want to escape from.

Rita and Sue (Siobhan Finneran and Michelle Holmes), by contrast, are schoolgirls seeking to escape from the deprived conditions of a rundown estate where they are variously subjected to drunken fathers, family violence and dismantled motorcycles in the kitchen (the contemporary equivalent of the “coal in the bath: stereotype of working-class life?) Their escape, at first, consists in little more than baby-sitting in a posh house where they can not only enjoy the home comforts on offer but get paid for it as well.

However the baby-sitting quickly degenerates into an excuse for indulging someone else’s fantasy (or so it seems) of the over-sexed older man and two insatiable under-aged girls. He is Bob (George Costigan) whose children Rita and Sue mind while he is out with his wife. While driving the girls home he makes a detour to take in a quick one (or, in this case, two) on the way. This sexual encounter is, we are supposed to believe, such an ecstatic experience for all concerned that the girls throw caution to the wind and take every opportunity to take turns at being first. If this sounds like the kind of sexual fantasy peddled by soft-porn newspapers, then Bob’s wife is presented in equally hackneyed form as the reason for his peccadilloes—hysterical, uptight and disinterested in sex.

She discovers that hubby is screwing the babysitters, takes the kids and leaves him. Bob promptly installs Rita (or was it Sue)) who is by now pregnant, as his new housekeeper in the matrimonial home. At this point the story becomes as rapid as Bob’s couplings. Sue, furious at what she sees as her best mate’s betrayal, takes up with a romantically inclined Pakistani and quickly moves into an unromantic back-to-back with him and his sister’s family. Rita has a miscarriage and Sue visits her in hospital. Bob gives her a lift home. They are seen by the Pakistani boyfriend who becomes jealous and violent. Sue kicks him in the balls and leaves him to return to the ménage à trois with Bob and Sue, in what we are supposed to see as a happy ending.

The film purports to be “progressive” although it’s difficult to see why. It uses a number of pernicious stereotypes of working-class people – drunken, amoral, depraved – while at the same time the only too real squalor, deprivation and poverty of life at the bottom of the heap is portrayed as something that can be escaped from through sex. Now, it may well be the case that for some people some of the time, sex is a refuge from the harsh reality of capitalism. It is certainly “sold” to us in that way. But the depiction of sex in this film, while depressingly realistic, no doubt (we were treated to an extended lecture on condoms which would probably qualify as an AIDS commercial), was not an answer but very much part of the problem.