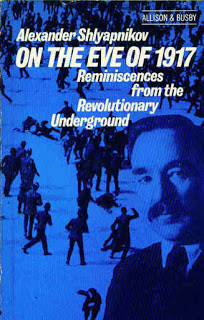 The publication of Alexander Shlyapnikov’s memoirs of Bolshevik Party work from 1914 to 1917 is a valuable contribution to our knowledge of what really went on in Russia in those years.

Shlyapnikov was remarkable; a Russian industrial worker, a skilled turner by trade, he journeyed abroad for six years, working in factories in Paris, London and Stuttgart, picking up a knowledge of languages and conditions in Europe before returning to St. Petersburg in 1914 as a “French” emigrant.

Re-starting work in the engineering workshops in St. Petersburg, he rapidly became a “key-man”, solely responsible for establishing contacts, building precarious underground organisations and developing an amazing technique for evading arrest by the Ochrana (Secret Police). He never walked down the same street twice, never slept in the same flat two nights running, and never gave his name or any address. His accounts of his hazardous trips to wartime Stockholm, London (where he worked as a turner at the old Fiat Motor Works at Wembley) and New York to raise money by selling reports of Czarist Jewish persecution to wealthy New York Jews, make fascinating reading. The sheer physical stamina of his exploits in Finland and Sweden is astounding. He reckoned the “life” of an active Party worker before arrest to be about three months.

His description of the success of the workers in presenting demands and wringing concessions on conditions of Czarist repression bears out the Marxian contention that not even the most savage oppression could prevent them.

The workers in the munition factories were indispensable. There was a limit to the number of “agitators” who could be slung into uniform and sent to the front, only to cause more trouble when they got there. He gives an excellent account of conditions in wartime (1914/16) St. Petersburg and Moscow, showing the complete breakdown of the system, resulting in famine conditions which made further prosecution of the War impossible. The lengthy manifestos and leaflets of the St. Petersburg Bureau combined demands for the Democratic Republic, higher wages, the eight-hour day, and confiscation of the land, with references to the abolition of capitalism and the establishment of socialism.

Shlyapnikov took part in the first “Workers Opposition” to Lenin and Trotsky’s Democratic Centralism in 1920, but subsequently made his peace with Stalin only to be arrested in 1930 — something Czar Nicholas failed to do. His end is shrouded in mystery; he disappeared. His international experience may have enabled him to escape back to France. As far is known, he did return to Russia on the invitation of his old buddy, V. M. Molotov, the Foreign Minister, to be driven straight to the Lubyanka Prison.

For all his battles, hardships and dangers, Stalinism was his reward. The book also brings home forcibly how pathetically backward and remote Russian conditions of political life were in 1914/16.