Who will do the dirty work? 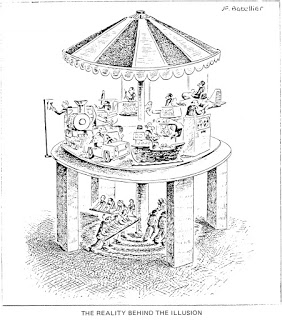 It’s a familiar scene. You’ve been pointing out the absurdity of a system in which the people who produce all the goods and services have access only to what their wages can buy while the Tiny Rowlands of this world, good at inheriting and making money but nothing else, possess and enjoy enough wealth to buy anything that takes their fancy. You’ve suggested that it’s time to get rid of the wages system, money and the negative employer-employee relationship; time for people to produce goods not for their employer to make a profit but so that these goods can be freely and directly available to all who need them. But what about the dirty work? You answer this objection by pointing out that advanced technology, when used for the benefit of all, will leave hardly any ‘dirty work’ at all to be done. But your objector is still shaking his head, unconvinced: “You can’t mechanise everything. What I want to know is who’ll sweep the streets and collect the rubbish?”

It’s true that the mechanisation argument isn’t entirely convincing. It’s hard to imagine a world without any unpleasant work and anyway it’s not for socialists to try and predict the exact details of how socialism will be organised. Better to answer the objection by looking at what people mean, and assume, when they talk about ‘dirty work’.

Work that is messy, that gets your hands dirty, is usually considered dirty work. But not always. Doctors and nurses, for example, have close contact with human functions that are normally regarded as dirty yet few people would consider that they did dirty work. For most people dirty work doesn’t just mean dirt but dirt plus heavy monotonous activity requiring little skill or creativity. This sort of work couldn’t, most people believe, be done voluntarily. The only way to motivate people to do it, we’re told, is by offering them money.

Yet if we look around we find that even in today’s society most dirty work isn’t done for money. Who sweeps and scrubs the floors, dusts and polishes, does the washing and the washing up, changes the nappies and worse? Women usually do it, but whether women or men, they do it for nothing. If something like half the human race spends most of its time doing dirty work without getting a wage for it, can it possibly be argued that money is the only motivation that will get people to do this kind of work? In fact the opposite appears to be true, namely that people do any kind of work better when motivated by social need — in the case of most women the needs of their family.

But is dirty work as objectionable anyway as most people believe it to be? Behind the belief that it is, lie two main assumptions. The first is that people don’t like dirt. Is this true? Children certainly do, in spite of strict training to dislike it. And in later life many still enjoy such ‘dirty’ activities as messing with bike or car engines, playing rugby on a muddy pitch, digging the garden . . . The second assumption is that people will naturally steer clear of activities that are strenuous or boring. But this again isn’t entirely true. When people are after a given result, they’re quite capable of going for activities of just this kind: they’ll jog around the park or swim up and down the pool for the sake of health and fitness, they’ll dig a patch to grow vegetables in, they’ll sand down woodwork before painting it to get a smooth finish. Jogging, digging and sandpapering aren’t the most exciting, creative ways of passing the time, but many people will do them if it’s a means to a desired end.
After all this, you think you’ve convinced your objector that dirty work is no real barrier to socialism. But he’s still shaking his head: “No matter what you say, nobody would want to be a dustbin man ”. And he’s right; of course: nobody would want to spend their entire working life collecting dustbins. But that doesn’t mean people wouldn’t mind collecting dustbins occasionally, when it was socially necessary.
Unfortunately though, in the society we live in at present, work isn’t done on the basis of people cooperating to do what’s socially necessary. Work is done within the system of employment. People have to sell their physical and mental energies to an employer in order to earn the money that will buy them the necessities of life. Once they have contracted to sell their energies as, say, dustbin collectors or teachers or bank workers, they will have to carry it out for most of their waking hours, perhaps for the rest of their active lives. They do not see the desired goal that would give them the incentive to work willingly and enjoy ably (a pay packet is no substitute). The imposed daily stretch of work and the lack of variety make all jobs boring and unsatisfying. In these unattractive conditions any type of work becomes objectionable and dirty work becomes positively offensive.
In socialism people will no longer work for an employer or for a wage or salary but simply to achieve a desired result. All the completely negative work that has to be done today — such as the production of armaments and the killing and destruction (the real ‘dirty’ work) — will disappear. So will all the useless non-productive work associated with money and production for profit — such as insurance, banking, sales promotion . . . All work will be equally useful and necessary to society and no stigma will be attached to any of it. People will be free to create conditions that will make any task pleasant and interesting, and in the process they will be able to put technology — now ensnared by the profit motive — to its best use.
People don’t mind getting their hands dirty nor their bodies tired. What they do mind is having to work under conditions that have taken all the pleasure out of work. Change the conditions (get rid of capitalism and establish socialism) and then the very concept of ‘dirty work’ will disappear.
Christine Moss