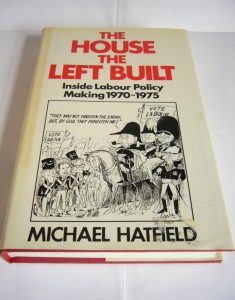 After its defeat in the 1970 General Election, the Labour Party set about formulating a set of policies to ensure its speedy return to power. It eventually produced what Hatfield calls “its most left wing programme in thirty years”, and his book aims to trace the process whereby these policies came to be adopted. As a study of the day-to-day exigencies of capitalist politics, The House the Left Built is mostly unilluminating. It does reveal the unprincipledness of Labour politics and the lack of democracy in the Labour Party, but it is hardly worth paying £8.50 to be reminded of this.

The most interesting point to emerge from the book is the extent to which Labour’s “left wing programme”, — a commitment to more nationalisation and state intervention in the economy — is not a monopoly of the Labour Party but rather a policy common to all those who try to administer capitalism. In 1973, Wedgwood Benn wrote that various Acts of Parliament passed by the Heath government “constitute the most comprehensive armoury of Governmental control that has ever been assembled for use over private industry, far exceeding all the powers thought to be necessary by the last Labour Government”, and he spoke of Heath’s “Spadework for Socialism” (meaning state capitalism). Hatfield makes the point that the watershed to a major extension of state intervention was actually crossed under a previous Tory government, in 1962, with the creation of the National Economic Development Council and the National Economic Development Office. After noting that Conservative governments have, for instance, nationalised the electricity grid system and brought London Transport under state control, he says, quite correctly, that “Labour Governments have brought in nationalisation measures for reasons not dissimilar to those that motivate Conservative Governments: the rationalisation of inefficient and bankrupt private enterprise”.

The pet idea of the Labour “left” during the period reviewed here was that of a state holding company (realised as the National Enterprise Board), which was modelled on similar European institutions; they did not publicly acknowledge this, however, on the opportunist grounds that to do so might weaken their case against British membership of the Common Market. The main Continental model was the Italian Industrial Reconstruction Institute, which, among other things, wholly owns the car firm of Alfa Romeo. The IRI illustrates well the fact that state control is a method which capitalist governments of all tinges must be prepared to employ: it was set up in the nineteen-thirties by Italy’s Fascist government as a “temporary” salvage company when three of the main private banks were threatened with bankruptcy.

State ownership, whether through direct nationalisation or by the government acquiring large blocks of shares, is a way of running, not abolishing, capitalism. Workers who believe nationalisation to represent an alternative to capitalism should reflect on the fact that it does not alter the worker’s status as a wage-slave, and consider the possibility of Socialism. The House that Socialists Will Build will not be a jerry-built slum but a sturdy mansion constructed out of the best materials and on the firm foundation of common ownership.